“Most people here think the plant should be shut down”

Read the Ford Rouge Rank-and-File Safety Committee’s appeal to join the fight to stop the spread of the virus and save lives. And for more information contact the WSWS Autoworker Newsletter at autoworkers@wsws.org.

As part of its ongoing campaign for the building of rank-and-file safety committees, workers in opposition to the homicidal back-to-work campaign being pushed by the corporate political establishment in the US and internationally, the World Socialist Web Site Autoworker Newsletter spoke to members of the new safety committee at Ford Motor Company’s flagship factory in Dearborn, Michigan that produces the top-selling F-150 pickup. After workers reacted to the spread of the pandemic in early March by initiating a series of job actions at factories throughout the Midwest, major automakers, including Ford, were compelled to shutter their plants for eight weeks from mid-March to mid-May.

In direct contradiction of the claims by the automakers that safe work practices are in place at their factories, the coronavirus continues to spread and to escalate throughout the industry in North America.

A member of the Rank-and-File Safety Committee at the Dearborn Truck Plant, which is part of the Ford Rouge complex just west of Detroit, reported to the WSWS Autoworker Newsletter Monday night that an assembly worker on Line 2 in the factory was seen repeatedly vomiting into a garbage can near his work station.

“He was throwing up with his head in the trash can,” the worker reported. “They brought a medical tug.” But in a flagrant violation of Ford Motor Company’s stated safety protocols, which were agreed to and signed off by the United Auto Workers, the company did not halt production to sanitize the factory in the wake of what could well be a dramatic outbreak of the disease. “There was no cleaning and no stopping of the line,” the worker concluded. “That makes 12 cases that I know of.” 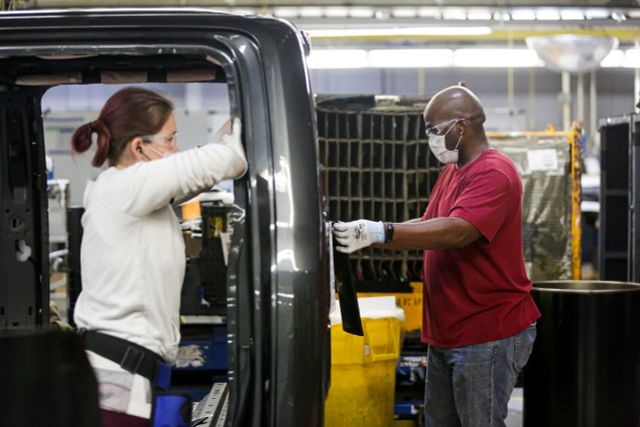 It is well known that dizziness combined with nausea and vomiting are common symptoms of the COVID-19 disease. When production resumed in May after the temporary shutdown of the auto industry, Ford CEO James Hackett told the Detroit Free Press at the time that it was important to work with state and local governments and the UAW to bring all production back on line at the same time. He said workers needed to “believe” that they were safe. Choosing his words carefully, he specifically avoided stating that the company would create a safe work environment. What mattered was only the appearance of safety. Since then even the appearance has gone by the board, and many workers are angered by the lack of safety.

“They give us three or four masks for each worker each day,” said an assembler with 10 years seniority. “But from what I understand, these masks are not up to the standard of a surgical mask. They have not been tested. They are not even comparable to the standard N95s. They let air in and out on the sides. Inside the plant we have to yell because it’s so loud. And if you can’t hear, then you naturally get closer than six feet.”

When a worker tested positive two days after production resumed in mid-May, the day shift stopped work. After an hourlong stand-off in which the union tried but failed to force a resumption of production, the company sent everybody home at 1:30 in the afternoon. There was, however, no 24-hour halt for deep cleaning. In fact, neither the company nor the union notified the night shift of the danger.

On the contrary, with the full collusion of UAW Local 600, management scrambled to do a quick once-over before sending the second shift into the plant to start work at 6:00 p.m. A similar event occurred at the Chicago Assembly Plant at around the same time. Since then, even though workers are testing positive in Dearborn, Chicago, Louisville and elsewhere, no Ford assembly line has been permitted to halt production for any reason.

In violation of every protocol for safe work practices during the pandemic, a cleaner will be called in to spray the infected area while the line is still running. Instead of slowing production to ensure safe practices, the company is pushing for maximum production no matter what. “They try to blame us,” he continued.

“The memo we received (from the UAW shop chairman) said that workers in ‘close contact’ are those within six feet for 15 minutes,” he said. “How do they determine that? There are floaters on the line who double up on jobs if someone is missing. They can be on many different lines spreading the virus if they get sick. How does that play into the six foot rule?”

Pushing for every ounce of production, the company creates unbearable conditions and then scapegoats the workers for the very conditions it has created.

“(The chairman) said, ‘The union is receiving documentation of Hot Line calls saying Members at DTP are not wearing the proper PPE... The company has told us that there is zero tolerance for not wearing your PPE.’ The union is on the side of the company down the line.”

Another worker explained the intense stress and brutal regimen of following the alternative work schedule under the constant threat of contracting COVID-19. The collapse of what few safety protocols the company instituted in May has intensified the pressure to the point where it has become unbearable.

“Every day we’re working 10.5 or 10.7 hours,” he said. “It’s a struggle just to try to wash your hands. The company distributes sanitizer, but that is no substitute for having time to clean your hands. The line never stops.

“When I’m home I try not to touch anything before I get in the shower, but even that’s a struggle when you’re tired,” he continued. “Then it’s eat, fall asleep, and I’m back on the road for work.”

The coronavirus has been shown to spread in water droplets from people speaking, coughing or sneezing. The droplets can remain in the air for longer periods and travel further than six feet. The risk increases in an industrial setting where workers must raise their voices to make themselves understood. Infection can also occur when virus particles find their way to a worker’s face after he or she touches a surface that has been contaminated.

A co-worker said she felt afraid of catching the virus from the moment she stepped onto the property. “When you’re in the tent at the gate,” she said, “you either show someone the questionnaire on your phone or fill out a paper questionnaire on the spot. If you have to fill out the paper, the pens they provide are used by every worker and never sanitized. If you answer one question with a ‘yes’ you will be sent home without pay. So naturally some people will answer ‘no,’ no matter if they really are sick or not, just to keep a job.”

She went on to describe the conditions at break times. “We have mass relief of workers to do whatever, bathroom breaks or lunch,” she said. “Taking the mask off to eat is unavoidable. And when I go to the bathroom, it’s impossible to separate yourself more than a few feet from each other. Everybody touches the doors. They are not sanitized. Most people don’t think it is safe. It scares me.”

One of her co-workers described what happened when an operator tested positive at the end of July. “Someone got sick on the engine line,” he said. “Some workers told me about tape that was placed around the area where he had worked. The line never stopped. The area supposedly had some cleaning done. I saw an ambulance, but the union never said anything about it. When I asked the people cleaning the break room and the engine line what happened, nobody knew.

“Studies have shown that an infected person can be contagious for days before showing any symptoms. The measures that we are using, like daily temperature checks and substandard facemasks, are useless. By the time someone has a high temperature, they could have already spread the disease.

“Line speed was down when we first came back to work. Now we run at full speed. It’s up to 650 trucks or more in 10 hours. One day, we worked 10 hours and 36 minutes to get the last truck out. The promise of safety [by the company] was just to get everyone back.

“In mid-July there was a bulletin posted that six workers tested positive, but there was no information on where they worked or how long they were in the plant. I couldn’t tell you exactly how many cases are here because the information is hidden. I’m sure there are many more.

“This is how reporting is done by the union. Most people here think the plant should be shut down completely.

“They claimed when we started there was a 24-hour rule for cleaning after someone was infected. It should be longer than 24 hours! But now they hide the positive cases to keep us working. Starting up the plant and being safe are two different things.

“We have temperature checks that aren’t working. This worker that was in here sick could’ve worked the whole week. People are getting angry. They are paying attention.”