Thousands of health workers took part in dozens of demonstrations and rallies in cities and towns across the UK Saturday, demanding a pay rise and adequate protection from COVID-19.

Despite years of pay cuts, the Johnson government last month excluded health workers from a miserly increase awarded to public sector workers. The decision has provoked widespread anger among workers who have risked their lives throughout the pandemic. Saturday’s events were promoted by Keep Our NHS Public (KONP), a campaign group backed by sections of the Labour Party and trade union bureaucracy. But neither Labour Party officials nor health unions openly associated themselves with the demonstrations, which were largely coordinated via local Facebook groups.

Along with the dismantling and privatization of the NHS, the attacks on pay and conditions have proceeded with the tacit support of the health unions and the Labour Party. In 2016, the British Medical Association betrayed months-long industrial action, including all-out strikes, by 50,000 junior doctors against vastly inferior contracts. Labour leader Jeremy Corbyn and his backers in the trade unions refused to mobilise in their support.

At Saturday’s protests, the same 13 health unions which promoted the 2018 rotten pay deal as the “best deal in 8 years” tried to creep into the events. Members of the pseudo-left Socialist Workers Party and Socialist Party were on hand to bolster the trade unions’ sagging credentials.

More than 100 nurses and health workers rallied in Bournemouth. Most banners were homemade, with slogans hostile to politicians’ hypocritical statements during weekly “clap for carers” and “clap for the NHS” events. Placards included, “Heroes to 0%”, “Claps don't pay the bills,” “Pay NHS a fair wage—you owe us,” “Some cuts don't heal,” “Stop clapping start talking” and “A nurse is for life, not just for Covid19.” 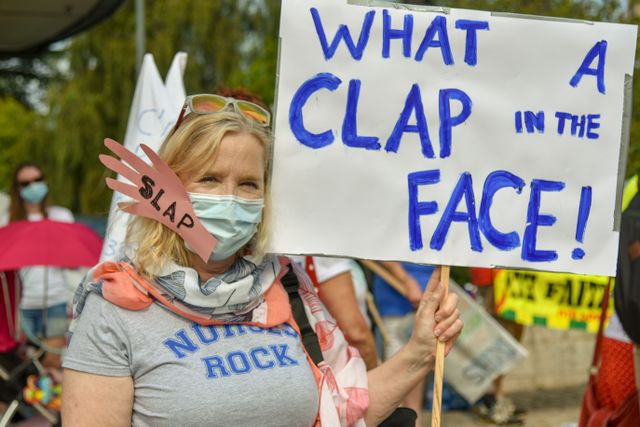 Health workers spoke of their anger over the deaths of more than 500 of their colleagues from COVID-19 across the UK and the absence of Personal Protective Equipment, access to tests and a liveable income.

Prior to the protest, the local Unison branch sent notification to its members that they were not endorsing the event due to social distancing concerns—although the union has shown no similar concern for its members inside the hospitals.

The Royal College of Nursing (RCN) tried to keep its members in the dark about the protests but delivered some T-shirts and placards with the RCN logo. Hospital workers turned out in defiance of the union’s efforts at sabotage, and despite their own concerns about COVID-19. 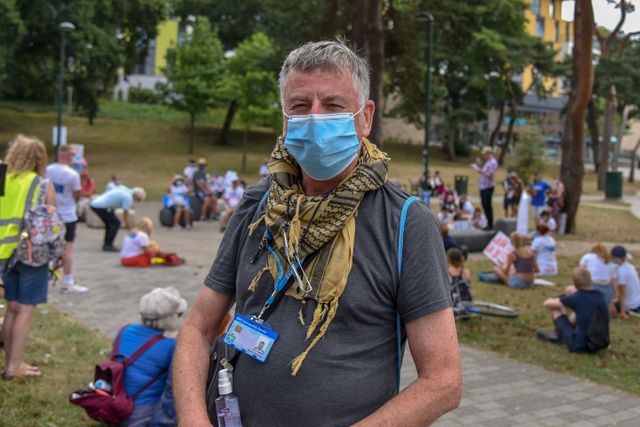 Kevin, an NHS worker from a local day hospital, told the WSWS, “I’ve got [COVID-19] antibodies now, but I was off sick for two months. I’m well over retirement, I’m 69 now, but I love my job and care about the NHS and we’ve got to protect it as best we can. I’m here for the younger nurses because the salary is pitiful. I’ve worked for the NHS for over 21 years. I can show you my wage slip and you’ll be shocked at the rate. It’s less than £12 an hour.”

Sarah, a student nurse from Yeovil, spoke about the Tory government’s 2017 scrapping of the bursary for student nurses. “I went into nursing 20 years ago and I didn’t have fees to pay,” she said. “Unfortunately, I didn’t see it through and here I am 20 years later and looking at £60,000 of debt. They are reintroducing the £5,000 bursary, but it’s still not enough. I still have to pay over £9,000 a year in tuition fees plus maintenance loans.

“I have five children. I need to be able to feed them. I don’t want to be working alongside studying and my placement, but I might have to in order to survive and that could affect my performance on the ward. It’s a scary time and my passion is to do this, regardless of the cost, but at the same time I am going to fight for what’s fair.” 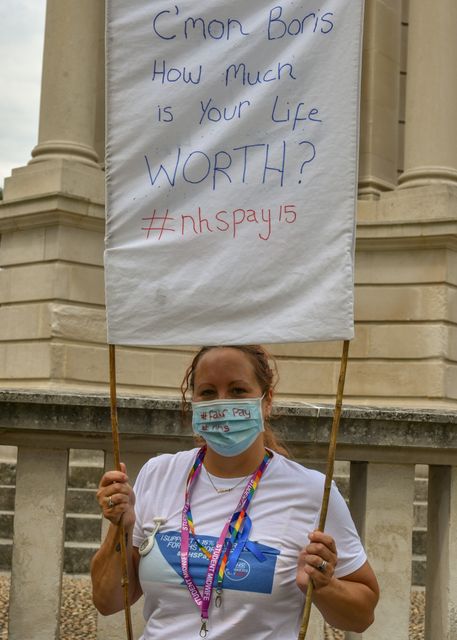 Asked about the deaths of NHS workers from COVID-19, Sarah replied, “The health worker deaths, each of the 540, physically hurt me. Wasted lives, and now their professionalism and their knowledge are lost from our NHS because our government just don’t care about people. They only care about their pockets.”

Sarah said of the ending of the national lockdown, “Yes, ‘Eat Out To Help Out’—let’s send the poor people out to the restaurants, give them discounts, and we can pay them to be guinea pigs! That’s what that is. I do not believe it’s safe to be out there yet. I know that businesses are important, but they will recover. The NHS won’t. You can’t bring back a dead NHS worker.”

Chris, who worked on a COVID-19 ward at Bournemouth Hospital said, “It was a really scary business. We had friends that had been upstairs on the ventilating machines, and we didn’t know if they’d survive or not.”

Asked whether they had enough PPE, Chris replied: “They kept changing [the advice]. At first, we had to have a new mask every time we saw a patient, and then it was, ‘You have to use your mask as much as possible as we are running out.’ We were working in extreme heat, and some patients were deaf and couldn’t hear us, so that was an added pressure. It scared a lot of older patients. They didn’t know what was going on. They’d been through wars, but this is something else. This is unprecedented.”

Speaking about the Johnson government’s response to the pandemic, Chris said, “They ignored the science. The scientists were trying to give us the message and they were just laughing at it. They are treating us all like pawns in a game because they are safe. We are the ones who suffer. Boris Johnson was laughing at it from the start, making little jokes. It’s not a joke. People are dying.”

Around 100 health workers protested in Cambridge. Nurses spoke from an open microphone pointing out that the police, military and MPs get pay rises all the time, but not NHS workers. Some nurses described having post-traumatic stress disorder (PTSD) from seeing their colleagues die, while they had to go on working. During a march, cars honked in support, including a couple of fire trucks. This prompted chants of “Firefighters need a pay rise too!”

Charlotte, a mental health nurse, delivered a moving speech, “For too long we have sat silently, with the government expecting that we would stay silent and complicit … Well, I say the time that ends is now.

“I vividly remember writing my whole dissertation on night shift, trying to fund my degree. And then you think that things are going to change when you qualify, and that finally that hard work, to get a decent wage, will be over. Well how wrong we were.

“Every politician, every MP that I’ve seen, spouts Agenda for Change, and that we have a pay deal. Well, no one told my bank account that I had a pay rise. It didn’t show in my pocket, it didn’t pay my rent. Many of us were worse off … I will have no increments and no raises for four years, yet I am expected to take on more and more responsibility, more and more pressure, and more and more stress.

“Too many of us have lost friends and family to COVID-19. All while we saw the government saying we have adequate PPE and how well stocked we were. How many of us sat on wards with no PPE, terrified we were going to pass something on to our family? How many of us were told how fantastic we were, and how we were heroes? We’re not heroes, we’re not something from the fairy tales, we’re nurses, and we’re people.

“And there is only so far that you can push us before we snap. Too many nurses are coming with PTSD symptoms. Too many nurses are breaking down and leaving the profession. It’s too tough for us, and I think now is the time to say that we stand, and we cannot work in these conditions any longer.”

Up to 150 people assembled at Piccadilly Gardens in central Manchester. Calls for strike action were met with applause. 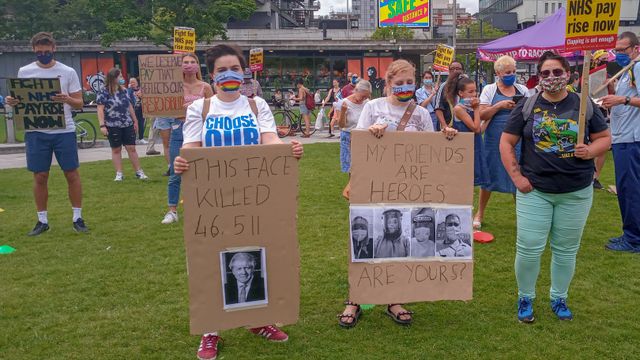 Many spoke about how hard it was to get PPE, and that migrant workers were being scapegoated during the pandemic. Some talked about doing unpaid overtime and said that if they didn’t, the NHS would collapse.

Jas, a student nurse, said she would be £60,000 in debt when she qualifies. The only protection she had at work was a mask. Both she and her partner caught COVID-19. She called the pay deal “a kick in the teeth.”

Another female student nurse said, “I will graduate in 2021. By then I will be £90k in debt as I did a degree prior to this one. My NHS student debt is £60k. I work long hours to pay my bills. Once I worked 90 hours over 9 days. I haven’t seen my family or friends since before Christmas.”

Hundreds of health workers and their supporters rallied in Glasgow Green. Scottish Socialist Party (SSP) member Ritchie Venton spoke from the platform, promoting the trade unions discredited 2018 “pay rise.” “This should be a platform for the intervention of the trade unions to get involved to fight for what you deserve ... I would advise you all to read the TUC policy brought out during the pandemic demanding a £2 an hour increase.” 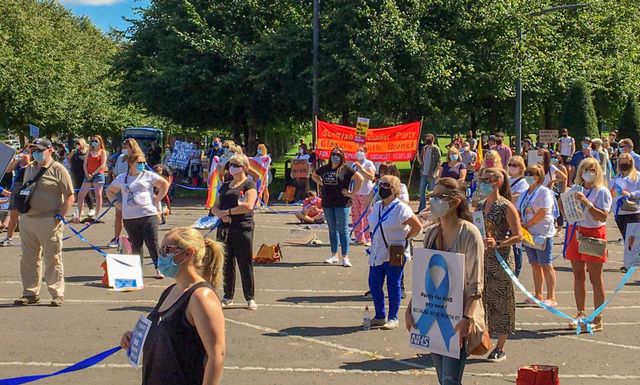 A nurse described how the NHS was running on the goodwill of staff, arriving early and staying late without pay, forgoing breaks to care for patients, or giving up annual leave due to understaffing. During the pandemic, she would come home exhausted and numb, knowing she wasn’t able to give the care she should due to an inadequate system.

More than 200 health workers protested in Leeds. Several health workers spoke of the decimation and privatization of the NHS. A nurse with 40 years’ service held a banner which said, "Enough is Enough."

A mental health nurse described the effects of COVID-19 restrictions on her elderly patients and said it was outrageous that mental health wards and beds were being closed during the pandemic.

Around 200 to 250 attended a rally and protest in Barkers Pool, in Sheffield city centre. Not a single trade union placard was present, just a few flags. Around 90 percent of placards were homemade, and these included, “You clapped for us now you crapped on us,” “Nurses are being exploited #Pay rise" and “Clapping won’t pay my bills” and “NURSE—Neglected, Underpaid, Refused, Suppressed and Exhausted.” 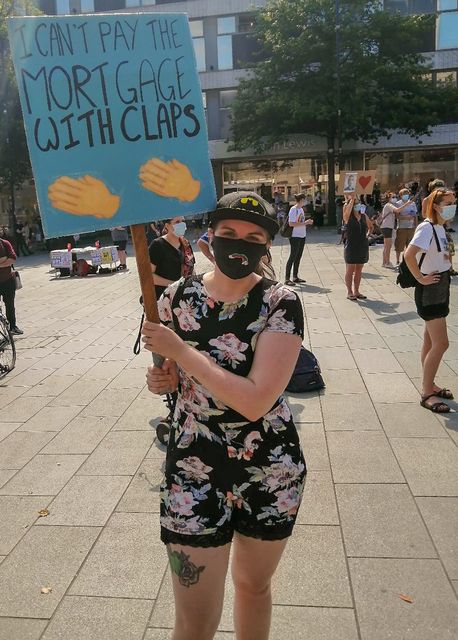 Representatives of pseudo-left groups spoke without identifying their political affiliations, presenting themselves as activists or union officials. They spent most of their time excusing the shameful role of the unions, including their role in delivering a rotten three-year pay deal. The unions “should” be organising national demonstrations and should “get off their knees,” declared one pseudo-left demagogue, claiming that pressure was already being productive with the unions agreeing to take up a 15 percent pay increase demand.

Two minute’s silence was held at 12 noon in memory of the 540 health care workers who have been killed by coronavirus in the UK.