A Save our Schools (SOS) report “Public Schools Face a Funding Crisis; Private Schools Are in Clover” has documented the widening funding gap between public and private schools in Australia.

The data exposes the fraud of the Gonski funding model, commissioned by then Labor Prime Minister Julia Gillard and launched in 2011 ostensibly to overcome the glaring socioeconomic divide in the public, Catholic and private school sectors.

David Gonski, a central figure in big business, was serving as chairman of the Australian Stock Exchange when Gillard appointed him. Sold as “needs-based,” the Gonski funding mechanism became the centre of teacher union campaigns. Millions of dollars of members’ union fees have been allocated to publicising it as a model for “fairer” school funding.

Significantly, the funding data analysed by the SOS report mainly covers the years following the Gonski Review of Funding for Schooling. 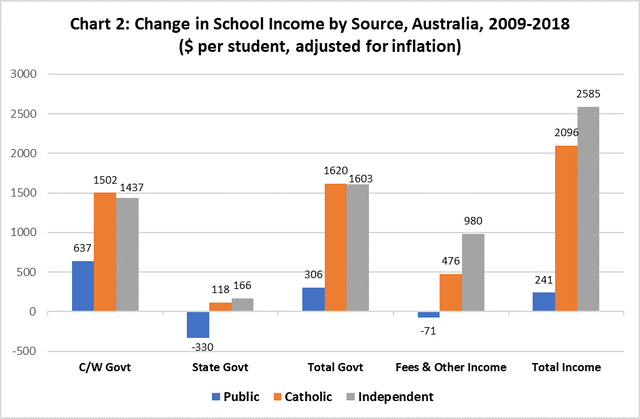 Credit: Save our Schools “Public Schools Face a Funding Crisis; Private Schools Are in Clover”

There was a significant cut—$330 per student on average—in state government funding for public schools. The Western Australian state government, whose public schools enrol a high proportion of Aboriginal students, pupils living in poverty and students in remote areas, cut a massive 13.7 percent from its schools budget. 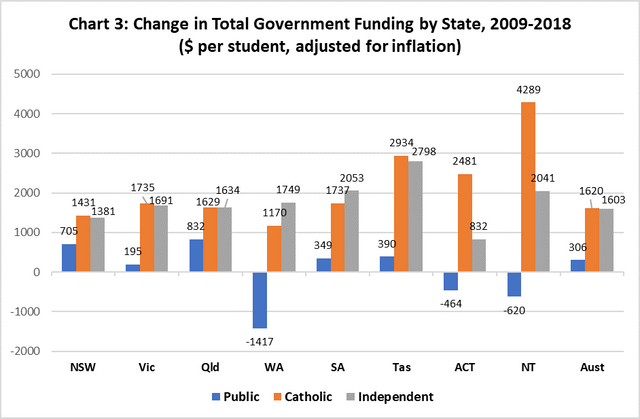 Credit: Save our Schools “Public Schools Face a Funding Crisis; Private Schools Are in Clover”

The report further referred to data from a 2018 Organisation for Economic Cooperation and Development (OECD) report showing that public schools in Australia have far fewer highly qualified teachers, more teacher shortages, more inadequately qualified teachers, more teacher absenteeism and more shortages of assisting staff than private schools. Thirty-five percent of students in public schools have their learning hindered by a lack of physical infrastructure, compared with 9 percent of students in private schools.

Public schools are supposedly fully funded by government, but increasingly pressure parents to pay “voluntary” levies of up to $1,300 per child annually. By comparison, about half of the income of private schools comes from school fees. The most elite private schools charge parents up to $40,000 per child per annum.

Australia has one of the most unequal education systems of any advanced economy due to privatisation measures promoted by successive Labor and Liberal-National governments since the 1970s.

Wealthy private schools, such as Melbourne Grammar, are showered with public money. Yet that school, for example, boasts of a $30 million science and technology hub with a rooftop terrace and weather monitoring station.

Meanwhile, the public Sheldow Park Primary school in Adelaide has walls that have not been painted in 15 years. The school’s principal told the media: “We have a plan to carpet two or three classrooms per year, based on need. So the ones with the biggest holes in them or the biggest rips get replaced first.”

The gulf between private and public schools has resulted in the country having one of the highest rates of non-public school attendance among the advanced capitalist countries. Forty percent of high school students now attend private schools.

Another SOS group report, The Bureaucratisation of Public Education in Australia, notes that over the past 20 years public schools also have experienced an enormous increase in requirements to comply with regulations, collect and record information and monitor performance. From 2015 to 2019 the number of management staff throughout the system increased by 70 percent—more than ten times the increase in the number of students and teachers.

As a result, teachers are spending the third highest number of hours on management and administration in the OECD.

The teacher unions, such as the Australia Education Union (AEU) and the New South Wales Teachers Federation (NSWTF), have played a leading role in helping governments impose these conditions. At the same time, they seek to tie teachers to illusions in Labor Party governments, despite the record of the Gillard government and one state Labor government after another.

Before last year’s federal election, the unions rebadged their campaign “I Give a Gonski” to “Fair Funding Now” to more closely link their campaign to Labor’s electoral claim to have policies that would lead to “fairness.” The AEU and the NSWTF launched a fleet of Fair Funding Now vans to visit marginal electorates. NSWTF President Maurie Mulheron called for a Labor vote, saying the Liberal Party had “no sense of a fair go.”

The Committee for Public Education (CFPE), established by the Socialist Equality Party, is providing leadership to teachers, parents and students in the fight for the social right to a fully-resourced, enlightened education for all students. This is in opposition to the agenda of the entire political establishment, including Labor, the Greens and the trade unions.

Such a struggle can only be based on a socialist perspective for the transformation of society as a whole in the interests of the working class, not the privileged few. The funds to provide a free, high quality education for all exist but securing them requires an assault on the vast wealth built up by the financial elite.

The CFPE is calling for rank-and-file committees of teachers, school staff, parents and students, completely independent of the unions, to be established in every school as part of the mobilisation of the entire working class in a fight to establish a society based on social need, not private profit. To discuss how to join this struggle, contact the CFPE.

Gonski 2.0: A new business blueprint for Australian school education
[29 May 2018]