With schools slated to reopen across New York City next week, 55 teachers and school staff in the district have already tested positive for COVID-19. Since most of those that tested positive had to wait several days before receiving their test results, many had already reported to school buildings for preservice preparations with colleagues last week.

Teachers across the largest school district in the United States returned to their buildings to prepare for the upcoming school year on September 8, after a deal was struck behind their backs between the United Federation of Teachers (UFT) and Democratic Mayor Bill de Blasio.

The deal, which highlights the collusion between the teachers unions in the US and both political parties in the reckless reopening of K-12 schools, sought to derail a widely anticipated teachers strike by delaying the resumption of in-person instruction until September 21. However, all the fundamental issues at stake in the reopening of New York City’s schools remain unresolved, and there is mounting opposition to this homicidal policy. 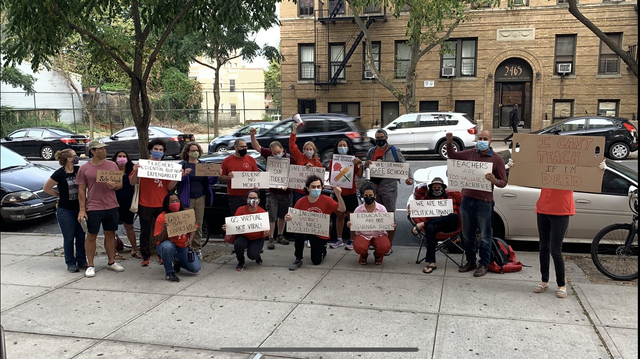 Late last Wednesday, news began to surface that two teachers at two separate schools, PS 001 and MS 88, both located in District 15 in Brooklyn, had tested positive for COVID-19. According to initial reports, the teachers received their test results Tuesday evening, after they had reported to their respective schools earlier the same day.

By Wednesday it was revealed that 16 teachers from 16 different buildings had tested positive, with most of the tests administered on September 2, a full eight days before being notified of their results and two days after they had been in contact with colleagues in school buildings.

The explosion of COVID-19 positive cases among teachers across the city was entirely predictable given the widespread outbreaks that have taken place in K-12 districts and college campuses across the United States during the past month. Since August, at least six K-12 teachers have died from the coronavirus nationally, with countless others falling ill to the virus.

As in other places, New York City teachers are increasingly engaging in efforts to organize against the resumption of in-person instruction.

On Friday, teachers at IS 230, located in the Jackson Heights neighborhood in Queens, one of the areas worst hit by the coronavirus in the spring, organized a walkout after learning that administrators had failed to notify them that one of their colleagues had received a positive test on Thursday. The teacher had immediately informed both the DOE and the UFT of the results.

One teacher told the media, “We saw the procedures supposedly put in place to keep us safe not actually keeping us safe. We were promised it would be different this time around, … and it hit close to home for us because we already lost a staff member” to the virus in March.

On Monday IS 230 teachers continued their walkout and were joined by teachers at PS 139 in the Flatbush neighborhood of Brooklyn, citing concerns ranging from delays in contact tracing and poor ventilation to inadequate measures for disinfecting the building. At least one teacher from the school tested positive for the virus last week.

In a recent open letter issued by the staff of MS 88, located in the Park Slope neighborhood of Brooklyn, teachers denounced the delays in testing results as well as the haphazard and incomplete manner in which the city’s contact tracing program is being carried out. Firsthand accounts are emerging of several teachers being contacted by the city’s Test & Trace Corps three days after reported exposures.

Teachers and administrators across the city are also increasingly exposing the fraudulent manner in which the Department of Education has responded to a series of recent inspections of ventilation systems within school buildings. In a recent example, teachers and administrators from the Murry Bergtraum Campus, located in Lower Manhattan, sent a letter to UFT President Michael Mulgrew and schools Chancellor Richard Carranza, citing details from the most recent ventilation report issued by the DOE for their building.

Among the many unsafe conditions within the building, educators highlight that none of the windows are functional and only 50 percent of the 225 office and classroom spaces within the facility are rated “operational.” The building, which has a student population of approximately 1,000, has no unit ventilators and only two usable bathrooms that must be shared by students and staff. Despite these conditions, the DOE has deemed the building ready to receive students for in-person classes on September 21. 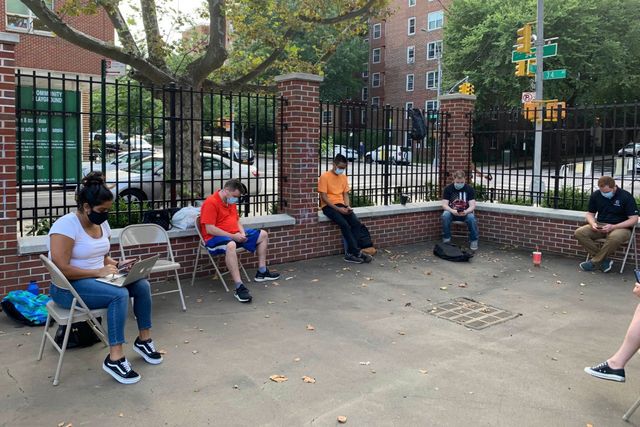 IS 230 teachers working outside after walking out last Friday (Credit: Twitter)

On Monday morning, educators and parents picketed outside the Murry Bergtraum campus.

Increasingly, parents of public school students have rallied behind educators in an effort to block the unsafe reopening of schools. Last Thursday, a parent advisory group in District 16, located in Brooklyn, voted unanimously to take legal action against the DOE to prevent the reopening of schools with in-person classes.

As in other parts of the US, the efforts by rank-and-file New York City educators to organize opposition to the reckless policy of in-person school reopening has shed light on the treacherous role being played by the American Federation of Teachers and its local affiliate, the UFT. While facilitating the reopening of schools, these unions seek to channel the immense opposition of teachers into the electoral campaigns of the Democratic Party.

The efforts of rank-and-file educators to organize popular opposition to the reckless school reopening policy is increasingly leading many to the conclusion that new organizations of struggle must be built. The recent formation of the New York City Educators Rank-and-File Safety Committee, along with similar committees of educators across the US, marks a significant step forward in this process.

By imposing a school reopening with in-person classes in New York City, with a student population of 1.1 million, de Blasio is attempting to normalize death among teachers and children. He spelled this out at a press conference Monday morning, stating, “Some people will test positive. … We have to remember that for the very small percentage of people who test positive for the coronavirus, it is a very temporary reality.” 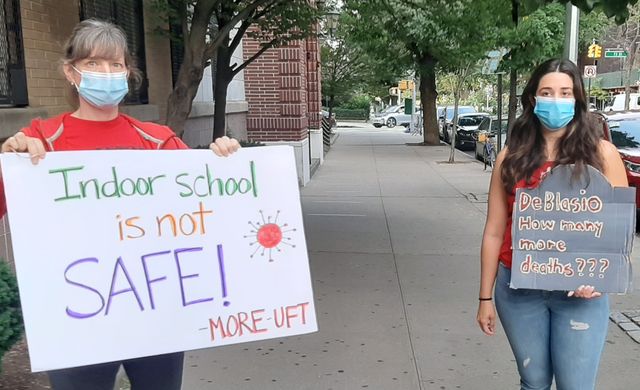 In pressing for the resumption of in-person learning in New York City, the ruling class aims to set a precedent to allow for similar reopenings in cities like Los Angeles, Chicago, and every other district throughout the country that is starting their semesters with online instruction.

The opposition to the unsafe reopening of schools is of vital interest to the working class as a whole. We call on all parents, students, teachers and education workers throughout New York City to read the founding declaration of the New York City Educators Rank-and-File Safety Committee and join us.

We urge teachers and education workers, school workers, parents and students throughout the US to build similar Rank-and-File Safety Committees in their respective areas and join our efforts to coordinate a broad, international campaign to end the homicidal policy of in-person school reopening being carried out in the name of capitalist profits.

Every educator who wants to take up this fight should join the committee and contact us today.