In a series of interviews, Sison has slandered Dr. Scalice as an agent of US imperialism and the Duterte regime. He also hailed Joseph Stalin, the mass murderer and grave-digger of the Russian Revolution, and regurgitated Stalinist lies about Leon Trotsky, the founder of the Fourth International which fought against the Stalinist bureaucracy’s betrayal of socialist internationalism.

Sison’s denunciations of Dr. Scalice must be taken as serious threats, given the history of Stalinist and Maoist parties, including the CPP, murdering individuals they denounce as “Trotskyites.”

Sison has reacted with such fury because Dr. Scalice thoroughly exposed, to a large international audience, the CPP’s support for fascist president Rodrigo Duterte. Moreover, the lecture placed the CPP’s support for Duterte before and after the 2016 election in the context of the Stalinists’ backing for a whole series of capitalist politicians, including former dictator Ferdinand Marcos, whom Sison endorsed for president in 1965.

The CPP is desperately seeking to cover up its record of betrayals, as it attempts to forge a new alliance with Duterte’s rivals in the political establishment, and to prevent rising anti-capitalist sentiment among workers and youth from becoming a conscious socialist movement, politically independent of the big business parties.

Despite churning out tens of thousands of words denouncing Dr. Scalice, Sison and company are unable to refute, or even seriously respond to the facts presented in his lecture. This is especially evident in Sison’s September 9 interview with Anakbayan, a youth organisation that follows the political line of the CPP, entitled, “On Trotskyites and other slanderers.”

Sison declares: “The Trotskyites are grossly lying when they claim that the CPP supported the presidential candidacy of Duterte.” In fact it is Sison who is engaged in the strategy of the Big Lie: repeating again and again what everyone knows to be false. As Dr. Scalice explained to the WSWS, “he is attempting to bludgeon the population into the belief that what they themselves witnessed never actually occurred.”

Sison states: “Before, during and after the 2016 presidential elections, nobody in his right mind believed Duterte when he said that he was Left and socialist.” He says he and the CPP’s allies in the “national democratic movement” limited themselves to “diplomatic and tactful words and gestures to Duterte encouraging him to engage in peace negotiations.”

These lies can be easily disproved by anyone with Internet access. After Duterte offered cabinet positions to three members of the national democratic movement, closely aligned with the CPP, Sison told CNN in an interview on May 16, 2016: “I would like to thank president Duterte. I am very proud of him... He was once my student at the Lyceum of the Philippines, and I share in the joy of his success. I wish him to succeed in his mission as president. He promises to be the first left president of the Philippines and he will keep his socialist orientation.” [emphasis added] 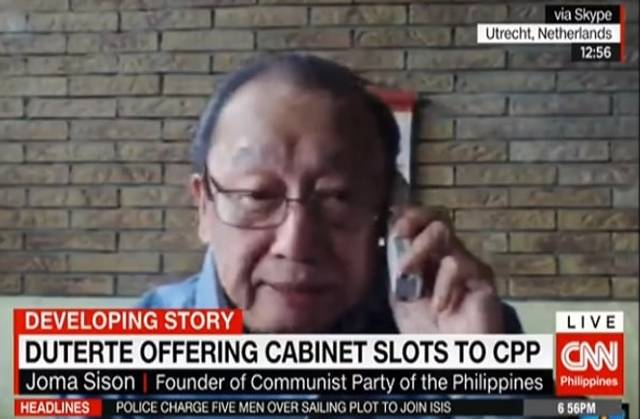 Jose Maria Sison on CNN, May 16, 2016: “He promises to be the first left president of the Philippines”

Sison wishes he could erase this statement, and many similar ones, from the historical record. Far from being a mere “diplomatic gesture” towards peace, it was a categorical endorsement of Duterte and an attempt to give him “socialist” credentials.

By this point, Duterte had already promised to conduct a murderous “war on drugs” and fill Manila Bay with 100,000 corpses. As Dr. Scalice explained, when the CPP-allied organisations promoted Duterte in 2015, and when, in Mindanao, they openly and vigorously campaigned for him in 2016, the leaders were well aware of his fascistic politics. For years as mayor of Davao he had operated extrajudicial death squads and had been a key ally of the national democratic movement.

Sison now claims that “the CPP has always been for the solution of the drug problem as a health problem and for cracking down on the drug lords, especially at the top level…” In fact, the party and its allied organisations hailed Duterte’s “war on drugs,” which targeted the poor.

Ang Bayan, the CPP’s main publication, wrote on June 21, 2016: “The people will completely support [puspusang susuportahan] the steps that Duterte will take to remove and punish the drug syndicates.” Einstein Recedes, secretary general of Anakbayan, wrote on June 26: “We believe that Duterte’s war on dangerous drugs and crime is a boon to the poor.”

Contradicting Sison’s assertion that “nobody in his right mind” ever believed Duterte was progressive, his interviewer from Anakbayan, Anghelo Godino, stated: “In the beginning of the Duterte administration, he seemed to be really bringing the change that he promised. Duterte appointed Leftist personalities in his cabinet such as Ka Paeng Mariano, Liza Maza, Joel Maglunsod, and Judy Taguiwalo.” He asked Sison: “Why did the left allow the appointment of these personalities?”

Sison absurdly replied that although he had approved the appointment of these leading members of CPP-allied unions and other organisations, this did not mean that the CPP supported the government. He said he asked Duterte to appoint them not as CPP members, but “on the basis of individual merits of being patriotic, competent, honest and diligent.” Sison did not explain why supposed leftists should accept any positions in an extreme right-wing government.

Sison’s incoherent answers will convince no one. As Dr. Scalice wrote in response to the Anakbayan interview: “Sison’s fundamental argument is: Stalin was right; I am always right; we never supported Duterte. He is not looking to win new forces to the party. No one will be won over by this sort of rhetoric.”

The CPP is seeking to intimidate those who oppose its political maneuvers from the left, as the party positions itself for a possible alliance with Duterte’s US-backed rival, vice-president Leni Robredo. Sison told Anakbayan he would be open to a coalition with Robredo’s Liberal Party if Duterte is overthrown. Sison’s Facebook page is full of appeals to “patriotic elements” within the military to intervene against Duterte, who the CPP now denounces as a puppet of China.

As Dr. Scalice’s lecture reveals, unstable and continually shifting alliances with different factions of the bourgeoisie are nothing new for the CPP and other Stalinist and Maoist parties internationally. The party does not represent the interests of the working class and is bitterly hostile to the fight for world socialist revolution. It advocates a two-stage theory of revolution, in which the working class must subordinate itself politically to the so-called progressive wing of the bourgeoisie, and socialist revolution is postponed into the distant future.

The reality is that there is no progressive faction of the ruling elite, in the Philippines or anywhere else. Under conditions of profound social crisis, exacerbated by the government’s disastrous response to the pandemic, and the growing danger of a US war against China, a Robredo government would be just as ruthless as Duterte’s in suppressing opposition. The CPP is offering its services to the bourgeoisie—once again—to provide a “left” cover for militarism, dictatorship and a deepening assault on the poor.

WSWS publishes Chinese translation of Dr. Joseph Scalice’s lecture exposing the betrayals of the Communist Party of the Philippines
[15 September 2020]