The rise and fall of the Second Chinese Revolution of 1925-1927 was one of the most significant political events in the history of the twentieth century. It ended with the deaths of tens of thousands of communist workers and the total destruction of the Chinese Communist Party as an organised movement of the working class. One cannot understand modern Chinese history, in particular the nature of the Maoist regime established in 1949, without understanding the lessons of 1925-27.

The revolutionary conceptions that guided the founding of the CCP 100 years ago stand in stark contradiction to the hypocrisy and falsifications that characterise the official centenary celebrations, which are designed to boost the party’s public standing and that of President Xi Jinping in particular.

The roots of the May 4 movement lay in the failure of the 1911 Chinese Revolution, led by Sun Yat-sen. The Chinese Communist Party (CCP) was founded in July 1921, little more than two years after the first Beijing protest. Many of the founding members were youth who had been radicalised by the May 4 movement.

The great tragedy of the Chinese revolution was that the monumental authority of the Russian Revolution was utilised, under the leadership of Stalin, to defend an opportunist policy based on the Mensheviks’ “two-stage” theory.

To make an assessment of Deng Xiaoping, it is necessary to examine the course of the Chinese Revolution and its relation to the strategic problems of the struggle for socialism in the twentieth century.

The essential theoretical issues that arose in the struggle over these two opposed perspectives were not only fought out by Trotsky against the Stalinist bureaucracy in the latter half of the 1920s, but have reemerged as the subject of repeated struggles within the Fourth International itself.

Read
Available from Mehring Books
Tragedy of the Chinese Revolution

This work is vital reading for those wishing to gain a deeper understanding of the failed Chinese revolution of 1925-27, one of the most significant events of the twentieth century. Contains Trotsky’s original introduction.

This volume contains a collection of Trotsky’s writings on the Chinese revolution of 1925-27 and its aftermath.

70 years after the Chinese Revolution: How the struggle for socialism was betrayed

This lecture was delivered at eight campuses in Australia and New Zealand to meetings organised by the International Youth and Students for Social Equality (IYSSE) between September 26 and October 17.

Trotskyism and the Chinese Revolution

The following editorial in the January-June 1989 edition of the Fourth International magazine on the Tiananmen Square massacre is an indictment of Stalinism and its opportunist apologists from the standpoint of orthodox Trotskyism.

The collapse of the Kuomintang dictatorship of Chiang Kai-shek and the victory of the Chinese Communist Party posed a number of important questions that required careful examination and consideration.

SWP resolution: The Third Chinese Revolution and its Aftermath 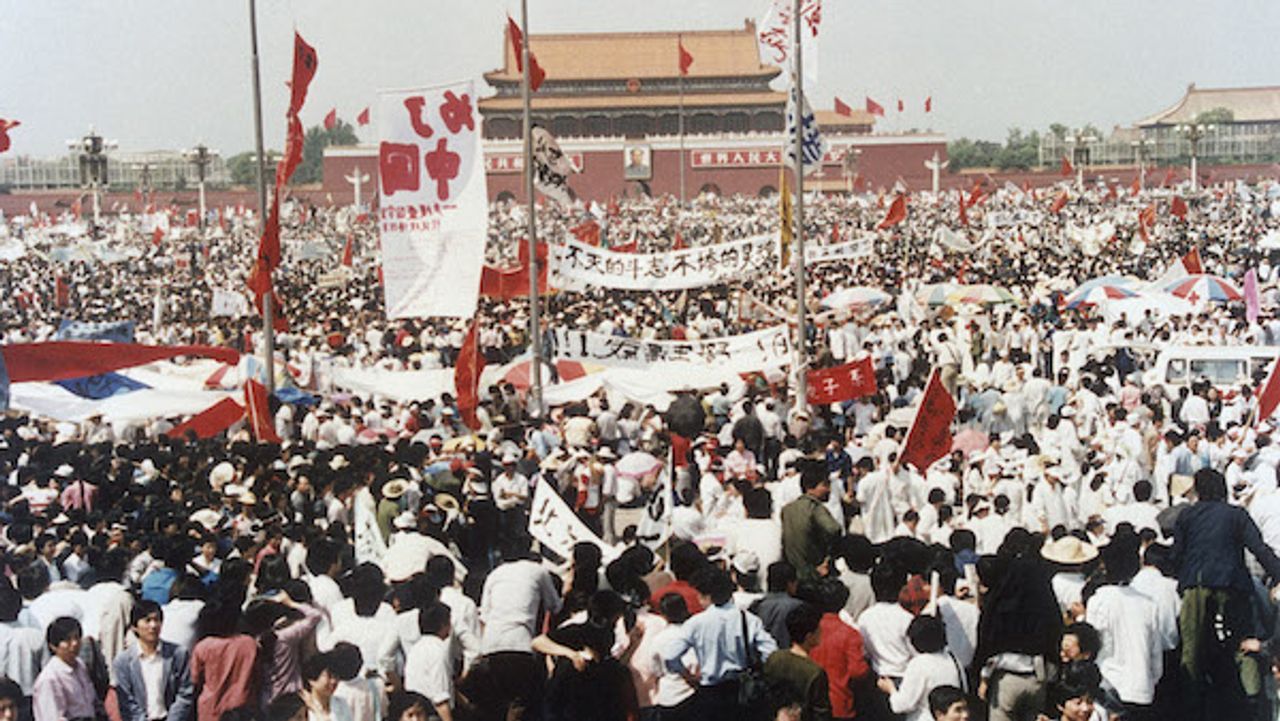 Victory to the Political Revolution in China

The following statement was published on June 8, 1989, just four days after the Chinese government’s brutal military crackdown on students and workers in Tiananmen Square. 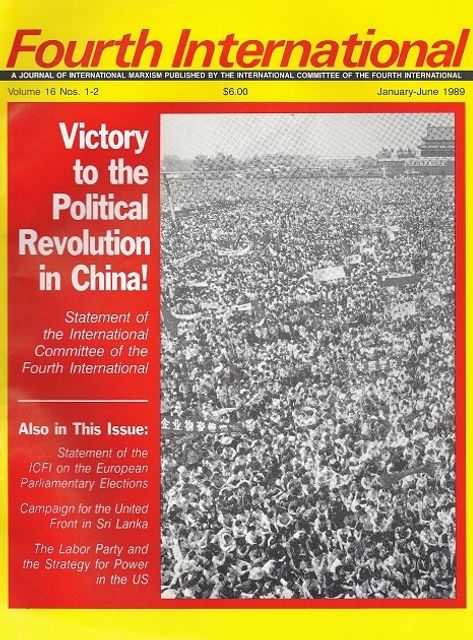 Origins and consequences of the 1989 Tiananmen Square massacre

Two decades ago, on June 4 1989, Beijing resembled a war zone, with trucks ablaze, rapid and continuous gunfire and tanks rolling through streets strewn with dead bodies.

The article confirms the essential analysis of the ICFI in 1989 that the terror unleashed by the Stalinist bureaucracy was above all directed against the working class that had risen in revolt against its policies of capitalist restoration.

This document was adopted by the SEP (Sri Lanka) at its 2011 founding congress in Colombo. It reviews the 75-year struggle of the Fourth International in South Asia for Trotsky’s theory of Permanent Revolution. It is critical for an understanding of the problems of the development of the revolutionary movement on the Indian subcontinent.

Read
The partition of South Asia

Seventy years since the communal Partition of South Asia

The Partition was one of the great crimes of the 20th century—a crime that has shaped, or more precisely deformed, the entire subsequent history of South Asia.

Seventy years after Sri Lankan independence: The record of capitalist decay and the necessity for socialism

Throughout the Indian subcontinent, there is no real independence from imperialism and the ruling classes have failed utterly to provide democratic rights and decent living standards for all.

The RCL/SEP’s struggle against the anti-Tamil civil war

The first of four articles on the political lessons of the entry of the LSSP into the government of Madame Sirima Bandaranaike in June 1964.

The lessons of the Lanka Sama Samaja Party’s Great Betrayal

This series of articles published by the Socialist Equality Party in Sri Lanka marks the fiftieth anniversary of its foundation in June 1968.

The RCL waged a consistent struggle, under difficult conditions, against the second coalition government, particularly against the LSSP, which continued to dishonestly trade on its previous Trotskyist record.

The lessons of the 1953 mass uprising (hartal) in Sri Lanka

The hartal showed that regardless of the intensity of a mass struggle, it will not succeed without a conscious Marxist leadership

Keerthi Balasuriya (November 4, 1948-December 18, 1987) was the general secretary of the Revolutionary Communist League, forerunner of the Socialist Equality Party in Sri Lanka, and a leading figure in the International Committee of the Fourth International. He was among the most outstanding representatives of Trotskyism in the latter half of the twentieth century.

More about Keerthi Balasuriya
Stalinism in the Philippines

First as Tragedy, Second as Farce: Marcos, Duterte and the Communist Parties of the Philippines

On August 26, Dr. Joseph Scalice delivered this lecture at Nanyang Technological University in Singapore on the support given by the Communist Party of the Philippines, and the various organizations that follow its political line, for Philippine President Rodrigo Duterte in 2016.

Forty-eight years since Marcos declared martial law in the Philippines

The Maoist Communist Party of the Philippines played a key role in suppressing opposition to Ferdinand Marcos’ imposition of martial law in 1972, by subordinating the mass movement of workers and youth to rival factions of the bourgeoisie.

In a detailed and engaging interview, Dr. Scalice answers the slanders of the Communist Party of the Philippines founder Jose Maria Sison.

Sison’s second interview, defending his politically bankrupt “semi-colonial, semi-feudal” thesis, is a desperate bid to stem the haemorrhaging of support for the Communist Party of the Philippines, and to suppress any questioning in its ranks.

The rise of Duterte in the Philippines: A warning to the international working class

US orchestrated Suharto's 1965-66 slaughter in Indonesia

Documents from the US State Department and the Central Intelligence Agency (CIA) indicate that, having seized power on October 1, 1965, Indonesia's General Suharto and other army generals—acting on the urgings of US leaders—used military and Muslim death squads to massacre of hundreds of thousands of workers, students and peasants.

The US and British governments, supported by Australia, were complicit in the murder of more than half a million alleged communist sympathisers in the wake of the 1965 Indonesian coup.

Police forced the organisers to cancel film showings and discussion panels referring to the massacre of over 500,000 people in the CIA-backed coup.

Documents show US participation in 1965-66 massacres in Indonesia

The Look of Silence: Important documentary on the aftermath of the 1965 Indonesia massacres