A public meeting called by the International Youth and Students for Social Equality (IYSSE) was held in Cambridge Saturday, opposing Cambridge University’s awarding of a prestigious research fellowship to the eugenicist Noah Carl.

The Toby Jackman Newton Trust Research Fellowship was awarded to Carl at the end of 2018, evoking widespread opposition from students and academic staff. An open letter, “No to Racist Pseudoscience at Cambridge,” was signed by nearly 1,500 academics and students.

Students from the University of Cambridge and Anglia Ruskin University attended the meeting. IYSSE member Thomas Scripps gave the opening report, followed by the German Sozialistische Gleichheitspartei (SGP) deputy-leader Christoph Vandreier, who joined via video link from Berlin. Vandreier has played a leading role in the struggle against pro-Nazi apologetics and the rise of neo-fascism in Germany. 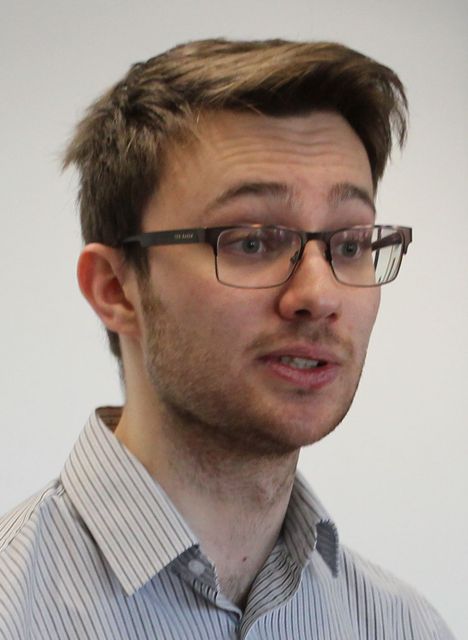 Thomas Scripps speaking at the meeting in Cambridge

Scripps explained, “While Carl’s academic papers are given a sociological gloss, his true social Darwinist colours are revealed by his participation in a close-knit network of naked white supremacists and eugenics advocates, including Emil Kirkegaard, Heiner Rindermann, Richard Lynn and Gerhard Meisenberg—some of his most common co-authors and publishers.”

“This is a cabal dedicated to the promotion of race science in the service of far-right and outright fascist politics. There is zero scientific credibility to this work,” said Scripps.

Scripps discussed the historical origins of eugenics in the late nineteenth century as a response by sections of the ruling class to the emergence of the imperialist epoch. “Eugenics became popular as a means of asserting that the imperialist despoiling of the planet was justified by the superiority of the white race and that immense social problems like poverty, unemployment and crime were not the product of the social system but of ‘defective’ human material.”

Eugenics formed a central plank of the Nazis’ programme that produced the Holocaust. Scripps explained that Nazi eugenicist Otmar von Verschuer was a founding editor of the Mankind Quarterly journal, which has published Carl’s recent work. “Verschuer was director of the Institute for Genetic Biology and Racial Hygiene from 1935 to 1942 and of the Kaiser Wilhelm Institute of Anthropology, Human Heredity, and Eugenics from 1942 to 1948. Here, he tutored Nazi war criminal Josef Mengele, who went on to conduct deadly human experiments as the camp physician at Auschwitz.”

That individuals such as Carl are now being defended by the University of Cambridge and by prominent media outlets show the rightward lurch of the ruling class internationally.

Christoph Vandreier’s remarks to the meeting were followed with enormous interest. He explained how the struggle at Humboldt University began in February 2014, after Professor of Eastern European History Jorg Baberowski claimed in Der Spiegel that Adolf Hitler “was not vicious.”

Outside of the SGP and the IYSSE, Baberowski’s pro-Nazi apologetics were not challenged by a single academic, journalist or politician in Germany. When the IYSSE opposed Baberowski’s statements, Humboldt University came to his defence and issued threats against the IYSSE. “The media attacked us, accusing us of ‘Trotskyite mobbing’ of an innocent professor, while they made no reference to Baberowski’s statements in defence of Hitler.”

The promotion of the theories connected to the far-right in universities was an “expression of very fundamental developments in society. In Germany the far-right has entered parliament for the first time since the end of the Nazi regime.”

Vandreier emphasised that the fascists in Germany were a “hated minority” and quoted from his book Why Are They Back, which is published by Mehring Verlag and has recently been translated into English.

“The AfD [Alternative for Germany] has neither a mass base of support nor combat-ready units like Hitler’s SA,” the book states. Unlike the Nazis, “which recruited their members among uprooted war veterans, socially ruined members of the petty-bourgeoisie and lumpen unemployed workers… The AfD’s strength arises exclusively out of the support it receives from the political parties, the media, the government and the state apparatus.” 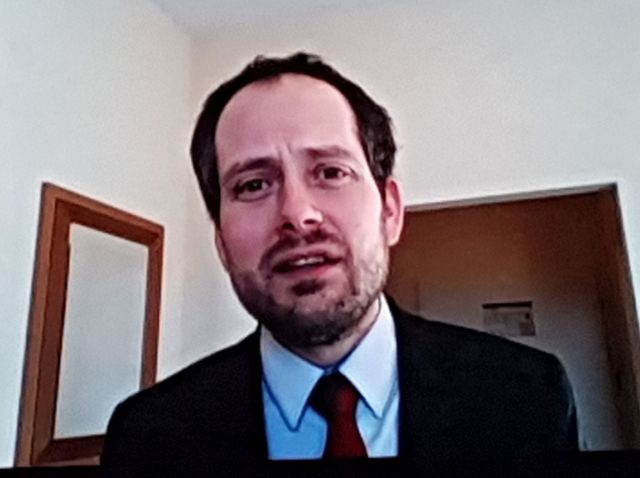 Christoph Vandreier speaking to the meeting via video link

“All of the undigested filth from the past is being revived,” said Vandreier. “Just as in the 1930s, fascism is the response of the ruling class to the breakdown of capitalism. That is why the opposition to fascism must be based on the fight against capitalism.”

A resolution, “Oppose the promotion of eugenics and pseudo-science at Cambridge University!” was adopted, calling for a broad political campaign against Carl’s appointment. It concluded: “We urge all concerned students, clubs and societies, to pass resolutions demanding that Noah Carl’s research fellowship be rescinded. This demand is part of the necessary fight against the state promotion of far-right influence at universities across Europe and internationally.”

A student from St. Edmund’s College at Cambridge University described how opposition to Carl’s appointment was met with official stonewalling, then censorship, lies, intimidation and threats of disciplinary action by college management. Student comments about protests over Noah Carl’s appointment were removed from the college’s Facebook page. College staff were deployed to block fire exits and lock doors to prevent students from attending a peaceful protest. When students gained entry to the college corridor using a swipe card, college authorities falsely claimed students had broken in, accusing them of “striking fear” into college staff.

The student explained, “They are under investigation themselves for appointing Noah Carl and yet they are threatening us with disciplinary action for shouting. We feel that we have no voice.”

Vandreier noted the way in which student opposition in both Germany and Britain was being attacked as “mobbing”, while academics advocating far-right views—including eugenics and pro-Nazi apologetics--were being defended.

“But even more important than the campaign against us, was the support that we got,” the SGP leader insisted. “We are not tilting at windmills. Quite the opposite. We represent in the fight against fascism the vast majority of the population. We must base our opposition to fascism very clearly on this opposition in the working class.” 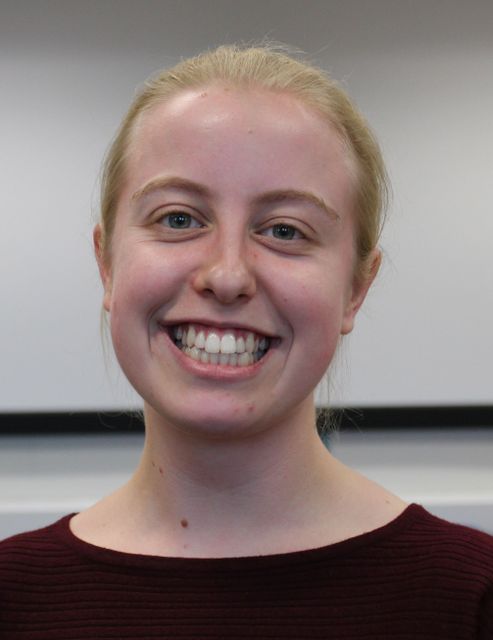 After the meeting, students stayed behind to talk with IYSSE and SEP members and to purchase literature. Elsie Linley, a postgraduate Classics student from St. Edmund’s College explained how she first became aware of Noah Carl’s pseudo-scientific and far-right views. “All I had to do—which was shocking to me—was Google him. Literally just a five second Google search… I thought, hang on, how is it that out of a thousand applicants—and the Toby Jackman fellowship is an extremely prestigious award—he has been chosen? I thought there must be some mistake. And when I realised, ‘this is true,’ I thought: ‘We’ve got to do something about this.’ The college interviewed him at multiple stages. They are aware of his views and they’re complicit…

“It’s crucial to have awareness of this raised outside of the University of Cambridge” she added. “At the moment it is being characterised by my college as ‘silly students’ and ‘snowflake students.’ There’s a risk that it will just get buried. They’re trying to silence us and to wear us out. So, today is really bolstering. It’s pleased me so much to know there are people who aren’t students of that college who are willing to help fight with us. It’s brilliant.” 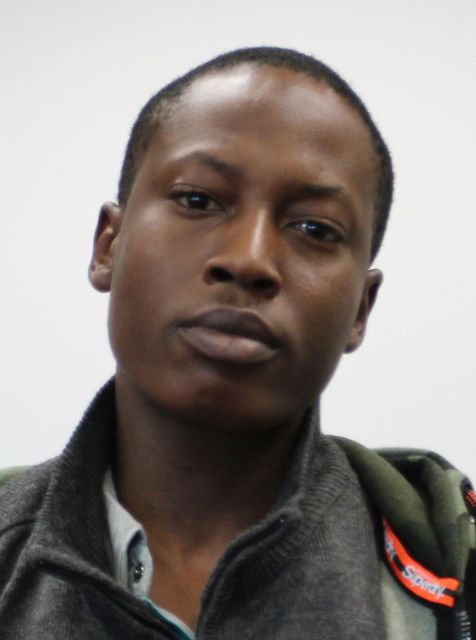 Bello Mohammed is studying architecture at Anglia Ruskin University. He said, “I was quite impressed at the meeting. I really liked it. I never expected to learn that in this world we live in right now, things like this could happen. The people at this meeting here are young and they will not know about events that happened in the last century.

“I was surprised when I read your leaflet that the things that happened in Germany in the past are still going on today. I hope this generation will learn from the past. I didn’t know about Noah Carl until I saw your leaflet explaining that he believes in eugenics. I knew about eugenics and had researched about the eugenics programme and how it was used previously.

“We have to confront the new Nazis. We have to constantly remind ourselves about what happened in the past so that we don’t repeat it. I think capitalism is a way of governing that strangles the poor people and we have to oppose it.”