Teacher strikes continue to escalate against a brutal drive by big business for the privatization of education and the further plundering of the “edu-market” for profit-taking. American teachers are part of a growing global movement against government austerity and social inequality.

Now in the seventh day of their strike, 3,000 teachers in Oakland, California are in the forefront. Crucially, educators there have formed a rank-and-file strike committee to assert the interests of teachers independent of the union and fight to broaden their strike by reaching out statewide and nationally to prepare a general strike against the bipartisan attack on public education. 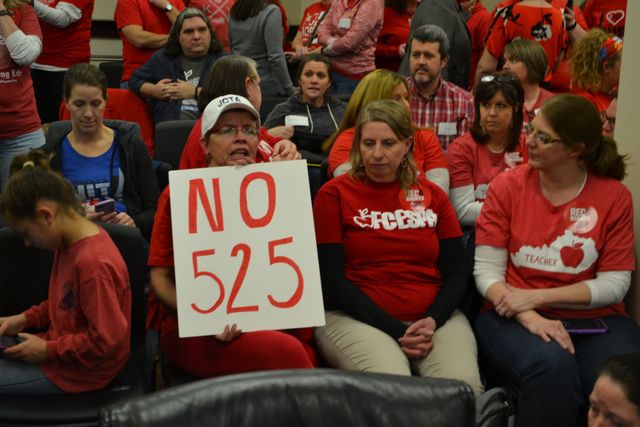 Thousands of teachers in Kentucky carried out a sickout and demonstration at the state capitol in Frankfort to defend pensions, resuming the protests which they carried out last March and April of last year. That job action led to the cancellation of classes for 168,000 students in some of the state’s two largest school districts, Jefferson (Louisville) and Fayette (Lexington), and six others.

While the Kentucky Education Association sought to subordinate the protest to its maneuvers with state Republicans and Democrats to retain its influence on the state pension board, teachers are not only angered over the attack on their retirement benefits but the same issues driving educators into struggle everywhere: low pay, underfunded schools and over-crowded classes.

In a statement posted on the “KY 120 United Facebook Thursday morning, the group said, “We show up every day in the classroom with a lot of passion, but sadly passion will not substitute for our pension or our paycheck. It has been crystal clear for over a year that public education, teachers, and our public pensions are under attack. Enough is enough. This isn’t about just one bill but a series of events that have transpired over the past year."

Brent McKim, president of the Jefferson County teacher union, said his union did not support the call for a sickout.

In 2018 nearly half a million US workers were on strike, the majority of which were teachers who rebelled against decades of union collusion in budget cuts and anti-teacher attacks. The American Federation of Teachers (AFT), the National Education Association (NEA) and their state and local affiliates kept each struggle isolated and then signed deals that betrayed teachers’ interests. A year after the revolt in West Virginia, teachers across the US are coming into action again. 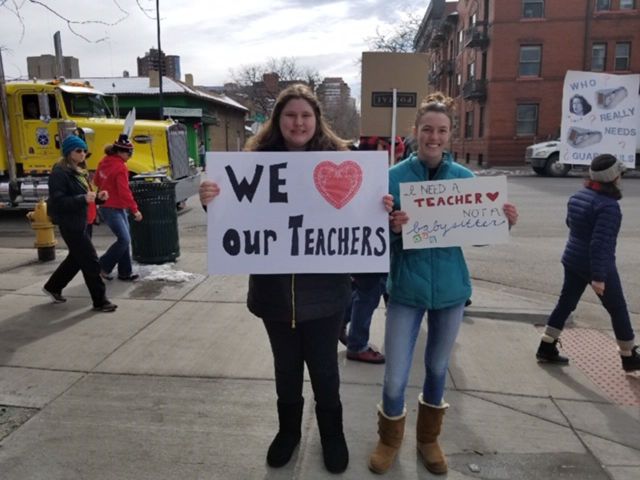 Students in Denver rallying for their teachers during the strike, February 11-13, 2019

Below is a summary of struggles in each state.

• West Virginia teachers returned to the picket lines on February 19 and 20th to fight the legislative threat to privatize schools and revisit their demands of last year for full funding of classrooms and a fix to their healthcare plan.

• In Oklahoma, teachers are talking about a renewed walkout. The union has called a “day of advocacy” for teachers to rally at the capitol on April 1 if the state does not provide $400 million to fund school workers’ raises. After the Oklahoma Education Association and American Federation of Teachers-Oklahoma City betrayed last year’s strike accepting a minimal pay increase, many teachers are still making only $36,000 a year. Moreover nothing has been done to address the systemic defunding of education in the state that has reduced 208 schools in 92 Oklahoma districts to four-day weeks and forced 30,000 teachers to leave the profession over the past six years in search of higher salaries.

• Arizona classrooms continued to be under-resourced and teachers underpaid, and teachers are threatening to resume their strike, which was abruptly ended by the union last May. Despite the promise of a 20% pay increase by 2020, Arizona public school teachers still rank at or near the bottom when it comes to salaries. In January it was announced that the school year had opened with 1,547 classrooms in Arizona without teachers, while another 663 teachers quit within the first month of school. 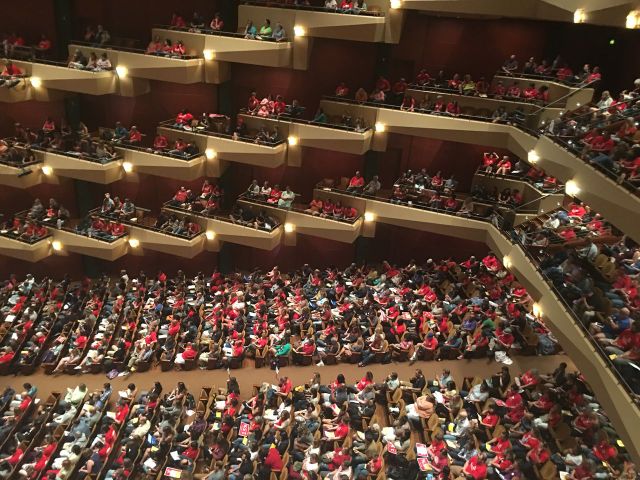 • Layoffs are now being imposed in many Washington state districts, including Seattle and Tacoma, in the aftermath of the union betrayal of last August’s strikes in a dozen districts. Port Angeles will lay off teachers and staff “at every level” said the district superintendent last week. He predicted larger class sizes in elementary, middle schools and high schools, following a nearly 40 percent decrease in local levy funds. Tacoma Public Schools is imposing $30 million in cuts next year and has already cut 36 full-time employees. Vancouver Public Schools are cutting $14 million from staffing in the 2019-2020 school year.

• In the aftermath of the betrayal of the six-day strike of Los Angeles teachers, new struggles are emerging in California alongside the Oakland walkout. New strikes are looming in Sacramento and East Bay and earlier this week teachers in Fremont, south of San Francisco, carried out sickouts. Some teachers in Berkeley and San Francisco carried out sickouts in solidarity with Oakland strikers.

• In Alaska,overflow crowds of educators, students and Alaskan residents packed town hall meetings in Anchorage and Eagle River last week to denounce Republican Governor Mike Dunleavy’s budget proposal which would make sweeping cuts to the state’s education budget, slashing $310 million from the Department of Education and Early Development and an additional $134 million from the University of Alaska. Using words like “draconian” and “morally bankrupt," the overflowing audience opposed the package of $1.6 billion in cuts which would also hit health care services. 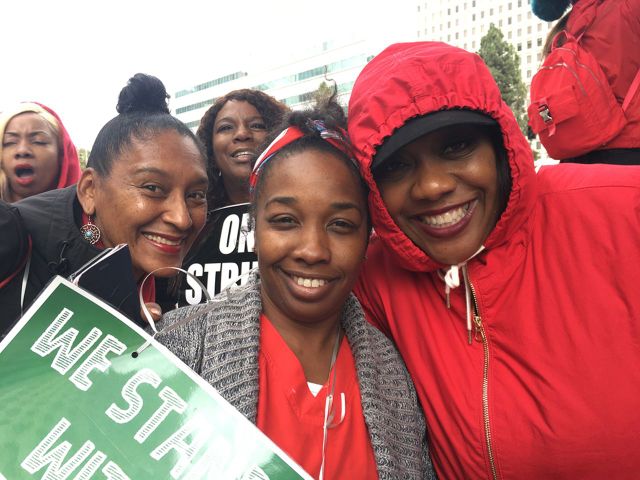 • A protest is planned by Indiana teachers March 9 at the statehouse in Indianapolis over poverty pay scales and lack of adequate resources in the classrooms. Educators have faced decades of “accountability” schemes, the growth of vouchers and salaries that can be as low as $26,000 a year. The state diverted $153 million this year to vouchers, in the nation’s largest such scheme, to funnel taxpayer money into private school tuition. “I’m ready to walk today. I’ve been ready to walk,” Mundy, a high school English teacher, told Chalkbeat. “When you demand more and more and more of teachers and are willing to give them less, and you make it very clear that what we do isn’t respected—at that point, that’s when I’ve decided I think it’s time to walk.”

• South Carolina's legislators are pushing an omnibus "education reform" bill that will provide teachers with up to a 5 percent raise in exchange for allowing the state to hand over to charter operators “underperforming schools” and allowing noncertified teachers to teach. During a five-hour hearing earlier this month, more than 400 teachers, parents, and students denounced the bill as "detrimental" and "ineffective." Many teachers said they were willing to strike if the bill advanced any further, reported Education Week.

• Demands are growing in Utah for increased K-12 spending, as a new report shows it is stuck at 50th in the nation. As a result of tax cuts implemented by then-governor Jon Huntsman over a decade ago, the rate for the highest tax brackets has declined from 7 percent to 5 percent, and public schools have been systematically defunded. For the school year that began in the fall of 2008, the total education budget was $9,601 per student; a decade later it was 2 percent less, just $9,473.

• Last year a massive tax cut for the wealthy and corporations was imposed in Idaho (raising taxes for low- and middle-income earners); this year, schools are being further short-changed. Idaho’s starting teacher salary of $33,743 puts it behind all but six states. The poverty wages in the state led 15 percent of teachers to quit after the first year and increasing numbers of educators are not fully trained but are “emergency credentialed.”

• In Texas, legislators are debating a possible $5,000 pay raise for teachers but are considering implementing a statewide pay-incentive program, or merit pay, which would provide a pay raise to the state's “best-performing” teachers. Republican Governor Greg Abbott said in his State of the State address this year that any pay raise teachers get will be “outcomes” based.

In addition, Louisiana educators have called for a strike by the end of the school year if no action is taken on pay increases, and educators are demanding pay raises in Mississippi, Maine, Nevada, North Dakota, Arkansas, Delaware, Georgia, New Mexico, Pennsylvania and other states.

There is no reason for any section of teachers to fight the powerful corporate and political forces arrayed against them alone. The WSWS Teacher Newsletter calls for the formation of rank-and-file strike committees in every school and community to mobilize the broadest support from students, parents and all workers for statewide and national action, including a political general strike in defense of education.

Teachers must fight for what educators and their students need, not what big business politicians and union bureaucrats say is affordable. The securing of the funding necessary for a vast improvement of public education and teachers’ living standards will require a frontal assault on the power and personal fortunes of the super-rich. This means a fight for socialism so the wealth produced by the working class can be used for human needs, not private profit.