With Julian Assange facing the threat of imminent eviction, a permanent vigil is being maintained outside Ecuador’s embassy in London demanding freedom and protection for the WikiLeaks founder under international law.

Members of the Socialist Equality Party took part in Saturday’s vigil, alongside organisers of the Defend Assange Campaign. The group has maintained a solid presence outside the embassy for nearly seven years in Assange’s defence. 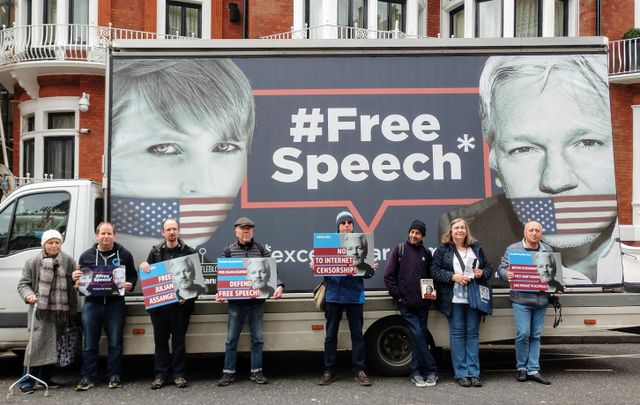 Outside the embassy on Saturday

Amid media reports seeking to downplay the threat to Assange, including claims that Ecuador’s government is not moving to revoke Assange’s political asylum, his lawyer Jennifer Robinson told the Sunrise program in Australia, “This information came from a credible source high up in the Ecuadorian government and that information was given to WikiLeaks. The accusation was that they are going to expel him and there is an agreement with the UK government that his asylum protection would not be respected and that he could be extradited to the United States with an assurance that he wouldn’t be sent to the death penalty.”

Alongside longstanding members of the Defend Assange Campaign, the London vigil attracted support from far and wide. 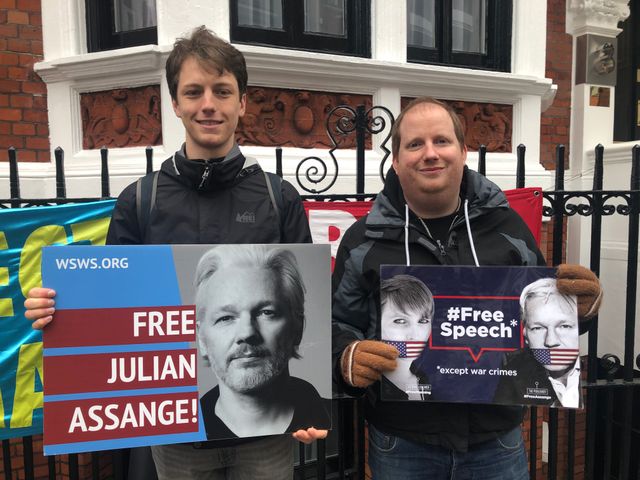 Tyler, 21, came directly from San Francisco: “I was leaving for Europe on a back-packing trip, but while I was on the plane, I saw that Julian Assange is about to get kicked out of the embassy. So that became the one thing that I needed to do in London.

“I heard about Assange through his work with WikiLeaks exposing the crimes of the United States government and I think Julian Assange is a hero for everything he’s done.”

“I think there’s a lot of disinformation in the United States, so sadly a lot of people are uninformed or misinformed. But I do think there are a lot of younger people who are aware of Julian Assange and support him. It’s very important that everyone supports Assange and opposes those who are trying to imprison him.” 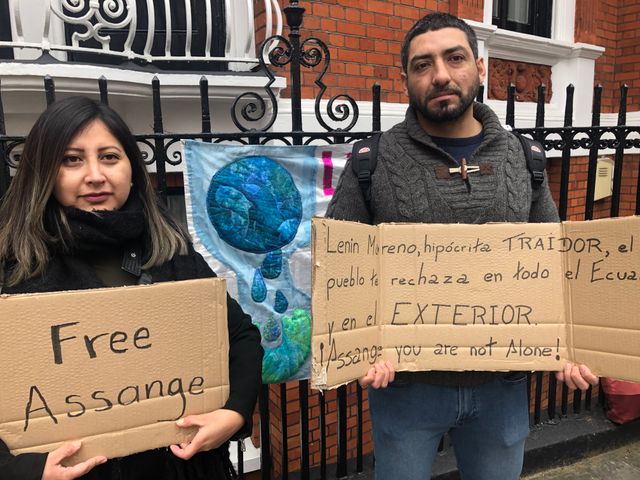 Javier and Cristina, originally from Ecuador, have been regular supporters of the vigil. Javier held a banner in Spanish, “Lenin Moreno: hypocrite, traitor. The people in Ecuador and the world are against you. Assange: you are not alone!”

Cristina explained, “We are against our president Lenin Moreno. We consider him a traitor for giving in on Assange to America. We know that once he’s expelled, he will be in danger.”

Over the weekend a 48-hour online vigil was held by Unity4J, listened to by thousands throughout the world. Speakers included Daniel Ellsberg, Chris Hedges, Craig Murray, Jimmy Dore and dozens more. A livestream from outside the embassy was featured between 12pm and 1pm on Saturday, hosted by Suzie Dawson, who has played a leading role in the defence of Assange.

Dawson interviewed Emmy Butlin, a leader of the UK’s Defend Assange Campaign, Gordon Dimmack, a citizen journalist and filmmaker, and Chris Marsden, national secretary of the Socialist Equality Party. Marsden's interview can be heard here from 2:31:10.

Butlin explained the vigil had been going since June 19, 2012, when Assange sought political asylum at Ecuador’s embassy in London, “We never expected this to last for such a long period of time. We were drawn out of solidarity for him and the work he has done for WikiLeaks and also in shock at how he was treated.”

Butlin said that Assange’s place of asylum had effectively been turned “into a police cell,” emphasising “We are extremely concerned about these latest reports from WikiLeaks that his expulsion is imminent. So we’ve come here today to support Julian… to witness and raise the alarm.”

Marsden told Dawson, “This is quite clearly the first great political crime of the 21st century… Julian Assange should be defended by millions of people all over the world but a cordon sanitaire has been placed around him in the official media. He’s been slandered and vilified.”

“I’m looking across the street and see the journalists there. It is the modern-day equivalent of knitting under the gallows. They are here to see a public execution… And while this is taking place, no opposition is being expressed in parliament by Jeremy Corbyn or any senior figure in the Labour Party, not by the National Union of Journalists or the countless bodies who should be defending human rights… There has got to be an urgent mobilisation of as broad a layer of workers and young people in opposition to this and in defence of Julian Assange. That is what we are trying to do, along with people such as yourself.”

Dawson thanked the WSWS for “amplifying the voices” of people actively supporting Julian Assange in countries such as Sri Lanka, India and Pakistan. Marsden replied:

“You tend to forget because of the relentless propaganda, but Julian Assange is seen as a hero by millions around the world, particularly in the oppressed and semi-colonial countries. These are people who have some experience with imperialist crimes, with wars, with brutality, with extraordinary rendition. When we speak through our comrades in Sri Lanka to workers, they are looking for a political lead on these questions.”

Dawson noted the mercenary role of the media, whose photographers had lined the street opposite the embassy, waiting “to get the photo that they can sell for half a million dollars.” Dawson referred to a comment on Twitter that Assange shouldn’t be “lionised” or “raised up” as “an individual,” but that the focus should be on the “principles involved.” Marsden replied:

“Principles, like history, move through people… If principles are not fought for, they die. Julian Assange doesn’t need to be raised up. He has raised himself up by what he has done… We are a socialist party and we fight to mobilise the working class as the revolutionary class in society. We see the defence of democratic rights as bound up with the struggle against capitalism and for socialism.

“We know that there is a broad mass opposition developing to the situation confronting people all around the world and to millions Julian Assange is a symbol of the alternative… This is not about hero worship. This is about someone who is one of our own and played an extraordinary part in the development of a new alternative political movement in the working class and oppressed… We don’t have political agreement with Julian Assange. We don’t pretend to. But we know he is someone who must be defended. This transcends any issues of political differences.” 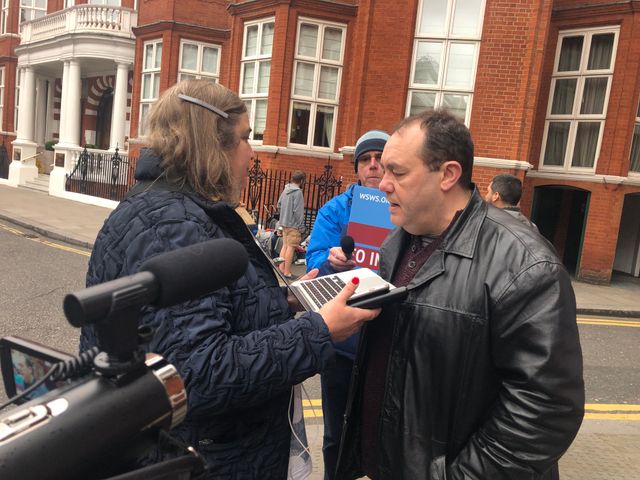 Chris Marsden being interviewed by Unity4J

Dawson noted that Marsden spoke “these very true words” with “two surveillance cameras above your head, which is a very physical reminder of the hardware of oppression.”

Marsden replied: “Obviously the state has enormous powers. We are aware as you are. Anyone who takes a stand knows full well that they are tackling a beast, but we know something else as well. Despite that power, it rests on very insecure foundations, because the real power in the world—and it was demonstrated in 2003 with the protests against the Iraq War—is that millions of people are opposed to what is taking place. Now if there is a leadership that can mobilise that social force they can have as many surveillance cameras as they like. It won’t save them.”