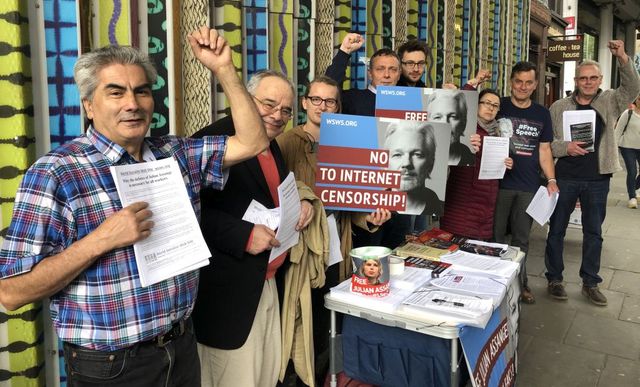 The campaign team at Ladbroke Grove

The campaigns followed last week’s public meeting that resolved to redouble efforts to secure Assange and Manning’s freedom. Assange is being held in London’s Belmarsh “supermax” Prison in solitary confinement, threatened with extradition to the United States where he faces a possible death penalty.

Members of the SEP were joined by supporters of Assange and Manning to distribute the statement “Why the defence of Julian Assange is necessary for all workers.” Other campaign material included an article exposing the long-discredited “rape” allegations against Assange.

Thousands of leaflets were distributed, and many people signed up to support the campaign and attend a series of public meetings being organised by the SEP across the UK. Some of Saturday’s campaign highlights were tweeted via the party’s Twitter account @SEP_Britain. 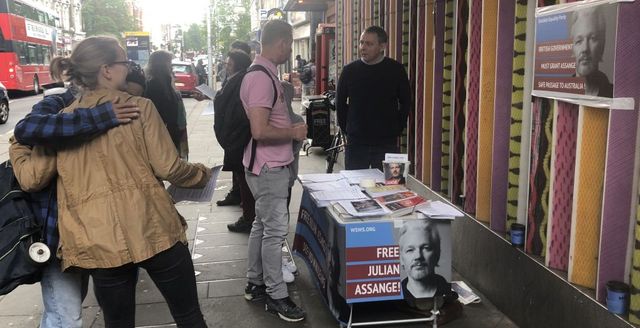 People stop to discuss with campaigners at Ladbroke Grove

In London, the team was joined by members of the Julian Assange Defence Committee, distributing more than 1,000 flyers outside Ladbroke Grove tube station. The campaign won a warm response.

Charles explained, “The whole idea of giving him over to the Americans is a terrible thing to do. It’s moral cowardice. I think our government should stand up to the USA and their almost fascist-like actions nowadays, especially with Donald Trump. I think Assange was a hero really. It’s too easy for governments to say ‘this is the Official Secrets Act.’ They can put anything under the Official Secrets Act, and they do. So, for Julian Assange to expose all of that was one of the best things that could have been done. It opened up the eyes of millions of people all over the world to what’s really going on.” Among others who took leaflets was a painter, still in his work gear, who voiced his concern at Assange being locked-up in Belmarsh Prison. He said he did not believe the Swedish allegations against Assange for a minute, describing them as “a set-up”. Another young man who took leaflets came back twice to congratulate campaigners, saying “this is the start of something big.”

Margaret spoke with Alberto from the Julian Assange Defence Committee. She said Assange was the victim of “charges that are trumped-up by Trump.” Margaret has supported Assange from the beginning, attending protests in his defence. “They are too embarrassed by the disclosures he has done. So, they have to get him and maybe assassinate him. They want to make an example of him.” 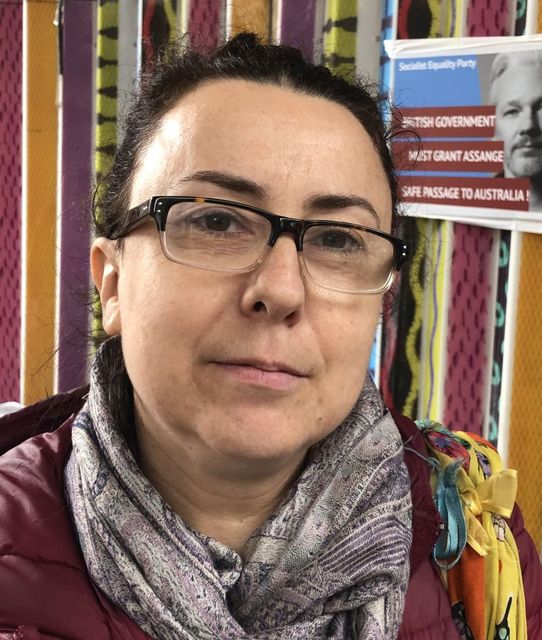 Maria was one of a number of people who told campaigners she did not know the truth: “I don’t know whether he’s a bad guy or a good guy. But I’ve heard his name mentioned many times and now I’ve come across this leaflet in Ladbroke Grove: ‘Why the defence of Julian Assange is necessary for all workers’. I’m not into politics, but I understand about history, and people need to know about the truth. I’m going to read and do my research and have a look at it. When there is a conflict you need to have both sides of the story—not just one. The truth will come out.”

Born in France, Maria said Yellow Vest protesters were dealing with concerns facing workers across Europe. “I am absolutely shocked by the fact that working people—people like me—can work full-time and still cannot make ends meet. The President [Macron] should listen to the people who are not so well off, who are working hard and are genuine, honest people. If you put people against the wall at some point, there is a limit. There are huge social clashes in France. Who is guilty for this? Not the people from other countries who are looking for work.”

Having lived in London for two decades, Maria said she is now worried about the promotion of nationalism and anti-immigrant sentiment. She pointed to the deportation of immigrants from the UK. “It doesn’t matter where we come from. We all need each other—yes or no? People who don’t have their documents are a human being just like we are. We all pay taxes or do the jobs that no-one else wants to do… At the end of the day, we are all together in this.”

Maria signed-up to receive more information about the campaign to free Assange and Manning.

Outside Manchester Central Library, a campaign stall attracted attention from the public. People approached to discuss the plight of Assange and Manning and more than a dozen signed-up to join the campaign. One young woman said, “This is amazing. I didn’t even know there was a campaign to defend Julian Assange.”

Salka from Spain was very animated and pleased to find a campaign in defence of Assange and Manning saying, “We must defend them, this is necessary for democracy. They must be freed! I want to sign up to the campaign to free them.”

Alexander said, “The information which Assange released should be out there. There should be no sneaky underhand tactics going on. It’s a slippery slope towards a surveillance state otherwise.’’ 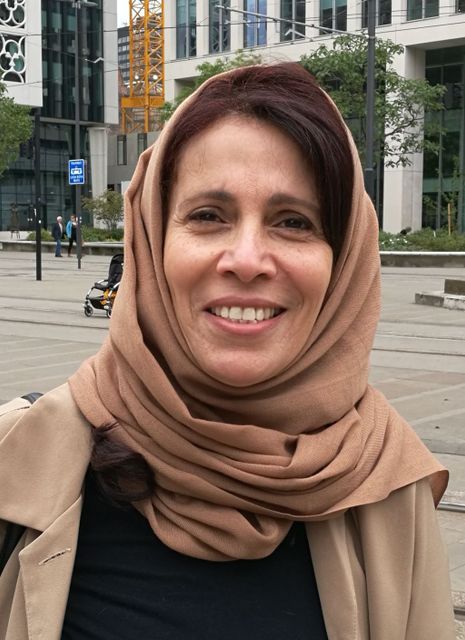 Eman from Yemen said, “We need people like them to divulge the secrets. We want to know what is going on. My country is ruined, and even as a Yemeni, I don’t know what is really going on there.”

Stephania said she distrusted the mainstream media so much she looked to online sources of alternative news for the truth, “The problem is that the news is all corporate, it’s all down to who pays.’’

Phil said, “I think Assange has done a service to all, both here and in America.’’ 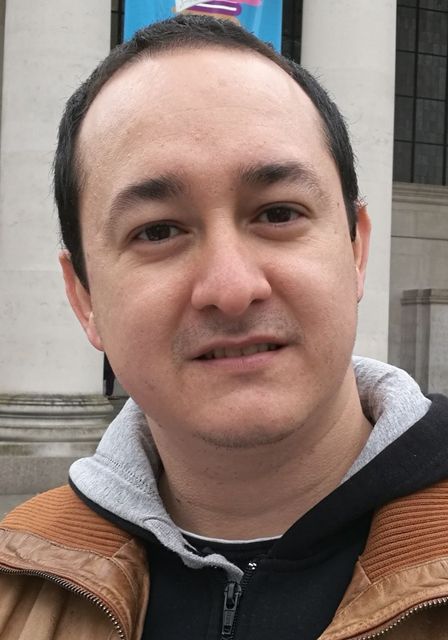 Guaro from Brazil said, “Of course I agree with your campaign to free Assange. What Assange has done is right.”

Eva said of Assange’s arrest and jailing, “It’s disgusting. No-one should be treated like that in a civilised society. To have so many people remove him from the Embassy and to see that was just shocking… Anyone who has been in solitary confinement, it has a detrimental effect. That is torture.”

Eva asked why it was that the UK government had disregarded a UN ruling that Assange was “arbitrarily detained”. A WSWS campaigner explained that it had breached international law in doing so and Eva responded, “Britain does that very well and always has done. It’s a no-win situation for him if he gets sent to Sweden or the US.

“WikiLeaks is absolutely vital because it’s the only way that any information can get through all the lies. And let’s say what is. It is not ‘fake news’. It is lies. Lies are lies and if WikiLeaks has factual evidence then it should be published. WikiLeaks has always done that. Assange genuinely believes in the truth. Name me one politician in Britain that does?”

Stephen, from Dublin, said he supported Assange and opposed his extradition to the US. He recalled the importance of information leaked by Edward Snowden detailing mass surveillance against the world’s population, “I was blown away by the revelations from Snowden.”

Harvey, a student, said, “Julian Assange was the only person who had a 100 percent record of telling the truth.” 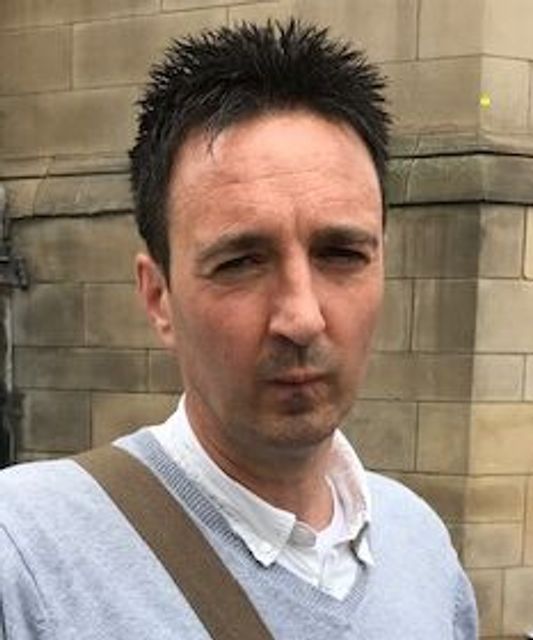 In Sheffield, campaign teams worked outside the Town Hall and Central Library. Steven, a carpetmaker, said, “What they are doing to Assange sounds like a typical case of government corruption, bullying and intimidating people to protect themselves. They don’t want anyone to know what the real agendas and who the real people are behind the government.

“I’ve known that governments are involved in corruption and secret deals for a long time, but this has really stepped up a gear. It is all about protecting tyrants who control the world. I think the solution has to be a radical one. We can’t fix the system the issues are too big. It has to go. I think this is where Julian Assange fits in. This is what he has revealed.” 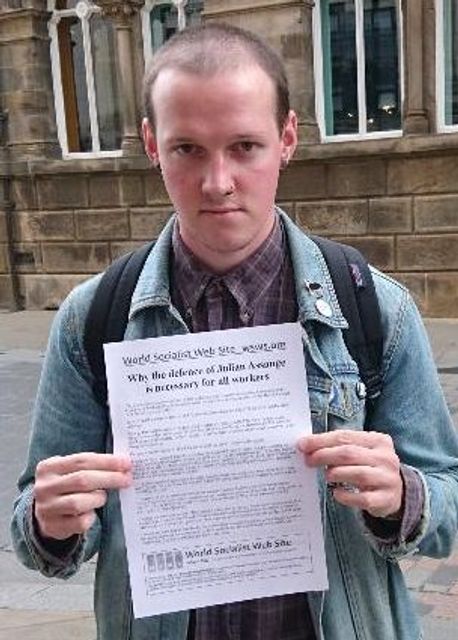 Tom, a video editor said, “Over the last year I have been scared by the direction we are heading. I read [George] Orwell’s 1984 and we are virtually there. I am not familiar with WikiLeaks exposures, but I want to become more informed. I have been bobbing along for too long just reacting.

“All the wars only benefit a handful of people. It is not about the general wellbeing. It is about profit.

“They want people to react in a certain way and not question or challenge the official narrative.”

Dan, a student, said, “WikiLeaks and Julian Assange had to break the law to fight for justice and expose the real criminals. All the talk about humanitarian intervention is just a thin veneer for the military industrial complex.” 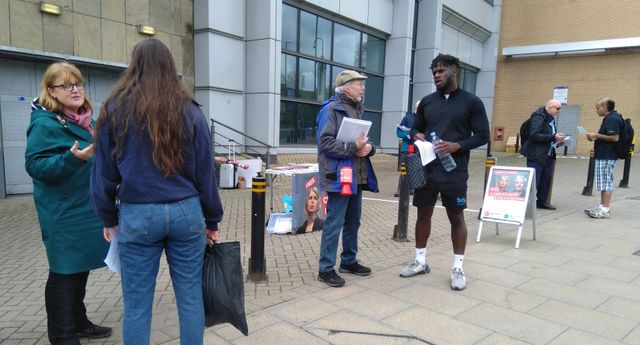 In Leeds, a campaign stall outside Leeds Beckett University drew support from scores of people, including students and young workers. Hundreds of leaflets were distributed and more than a dozen signed-up to support the campaign. Several tickets were sold for a public meeting called by the SEP.

Lewis said, “Freedom of information is so important in the times in which we live. We don’t know how censored the media is. It’s so important to have people like Julian Assange and Chelsea Manning so we realise there’s more to what’s happening than the mainstream media let on. Assange and Manning have not done anything wrong. They’ve only told the truth.” 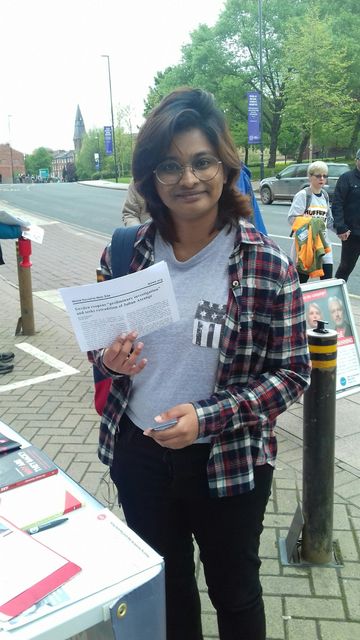 Lavania, a law student, said, “I think the arrest of Julian Assange is an infringement of basic human rights and basically all the states are infringing it. What we’re not realising is that all these problems [war and social inequality] are actually linked. With everything that’s going on, every government is having meetings every day and they are trying to figure out ways to stay in power. It’s a continuous power play—they want to make an example of individuals, like Assange.

“There has always been class inequality, but attacking individual freedoms just further proves that it is being deepened. I think young people should start taking a stand.” 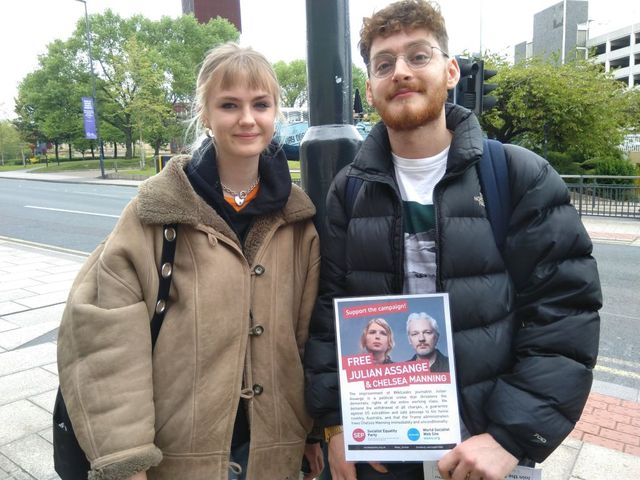 Alexei, a sixth form college student said, “I definitely think America’s interest in this is he has exposed some stuff they really wished he hadn’t and they are trying to make an example of him. You will probably be seeing him extradited at some point. Then who knows what’s going to happen to him.

“Me and my friends talk about the case a lot. People have to stay educated, reading about things and don’t accept all our information from general sources.”

Over the coming week the SEP will announce public meetings across the UK to fight for Assange and Manning’s freedom.