The powerful strike by 32,000 Chicago Public Schools (CPS) teachers and support staff is in danger of being betrayed. The Chicago Teachers Union (CTU) and the Democratic Party, led by Mayor Lori Lighfoot in Chicago, are working behind closed doors to end the strike and deepen the attack on public education. 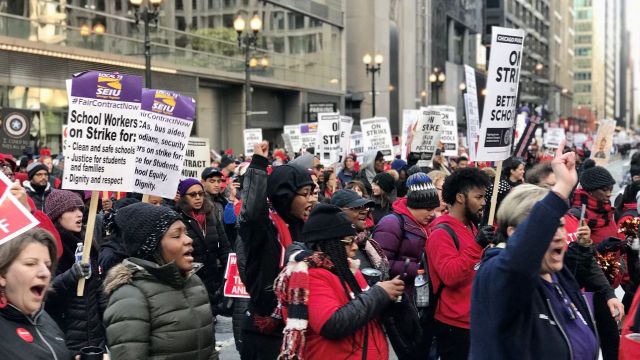 Teachers on strike marching in Chicago

If the strike remains in the hands of the CTU, the main demands of teachers for smaller class sizes, increased staffing and higher pay will be answered only by further attacks on the livelihood of teachers and support staff and public education as a whole. Teachers have been forced into financial hardship without any strike pay throughout the duration of the strike while being kept in the dark about the real content of the negotiations.

Speaking at a rally at Lane Tech High School Friday morning, CTU President Jesse Sharkey said, “Right now we have progress. I’m not going to say more than that. We’re in a sensitive junction right now and I’m optimistic.” CTU chief of staff Jennifer Johnson said Thursday night that it was “absolutely our hope” to be back in school on Monday. 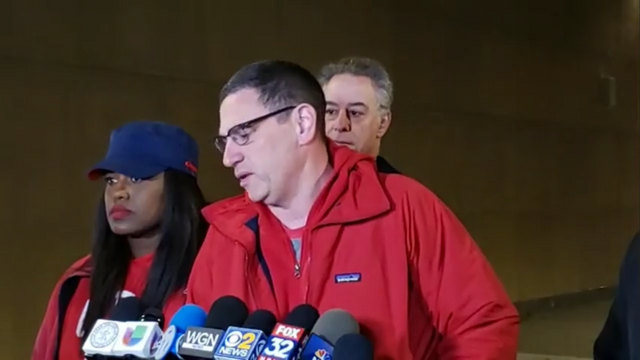 Throughout the whole process, Lightfoot has insisted there is “no money” for any significant increase in funding for smaller class sizes or higher salaries for teachers. On Wednesday, she arrogantly told teachers that they should “live within their means.”

As tens of thousands of teachers and supporters protested outside of Chicago’s City Hall on Wednesday, Lightfoot unveiled her 2020 austerity budget, which includes various regressive taxes, spending cuts and a $120 million increase in funding for the Chicago Police Department (CPD). The same day, Lightfoot spoke for the entire capitalist ruling class when she told the Chicago Sun-Times, “We won’t bail out CPS, pay for everything [that] teachers want.”

Lightfoot and CPS CEO Janice Jackson have called for a 16 percent pay increase over five years, which does not keep up with inflation, along with increased healthcare costs after the third and fourth year. The CTU has called for an insubstantial 15 percent raise over three years. The CTU said this week that the outstanding issues center on issues of enforcement on class sizes and staffing, which Lightfoot has insisted there is no money for.

When asked by a reporter about the mediator’s role, Sharkey evasively replied on Friday evening’s bargaining update, “I don’t want to get into the specifics of what the mediator’s involved in bargaining.” He added, “There’s a degree of frustration that goes with this process, and you have to manage emotions. Negotiations at this time are sensitive.”

There is no doubt a lot of concern in the about CTU whether it can bring back a concessions contract to teachers. Sharkey admitted, “At this point in the process our members are very concerned about what’s going on [at the bargaining] table.” He added, “We are making a commitment to improve the schools for a long time in the future.”

Teachers should put no trust in the CTU or the Democratic Party. The conditions of overcrowding, lack of nurses and librarians and stagnant pay are the direct outcome of the betrayals by the CTU, working in tandem with the Democratic Party, since the Chicago teachers strike seven years ago.

The powerful seven-day strike in 2012 by more than 30,000 CPS educators was betrayed by the CTU, led by then-President Karen Lewis and then-Vice President Sharkey. The strike pitted thousands of teachers directly against the Democratic Party, lead by Barack Obama’s former chief-of-staff Rahm Emanuel. Under Obama, public education was decimated, and hundreds of thousands of teachers were laid off across the country.

None of the fundamental demands of teachers were met after the CTU shut the strike down and declared a “victory.” Instead, the end of the strike led to the closure of 49 schools in 2013 by the Emanuel administration. Thousands of teachers were laid off, conditions in the schools rapidly deteriorated and charter schools expanded throughout the city.

What is often hailed as a shining example of a victorious strike— by groups like the now-dissolved International Socialist Organization (ISO) and Democratic Socialist of America (DSA)—only increased the downward spiral of public education in Chicago. Sharkey was a leading member of the ISO, which played a key role in covering up for the sellout of the strike in 2012. Despite pretensions to oppose the Democratic Party, Sharkey and the former ISO members have more openly sought to integrate into the Democratic Party this year.

As Sharkey said during a rally on Tuesday with AFT President Randi Weingarten and Democratic presidential candidate Elizabeth Warren. “We were asking for the same things [in 2012] we are asking for today… the sign says CPS students deserve more school nurses, more counselors, more social workers and more services.” This revealing admission indirectly highlights that the CTU’s betrayal of the 2012 strike did nothing to improve the conditions of teachers and students.

On Friday afternoon, Sharkey had a phone call with presidential candidate Joe Biden. “It’s not about you, it’s about the children,” Biden said. Sharkey prostrated himself behind the former vice president, who worked with the Obama administration to attack public education.

The unions are working on behalf of the Democratic Party to prevent the strike from becoming a wider political struggle against social inequality. The seven-day strike, which began on October 17, canceling school for more than 300,000 students, is on the verge of becoming the second longest Chicago teachers strike since 1987, when the CTU held a 17-day strike.

There is a growing fear by the CTU and the political establishment that the strike may expand and escape the grip of the unions and develop into conflict with the Democratic Party.

The CTU, along with the Service Employees International Union (SEIU) Local 73, which covers educational support staff, have from the outset sought to keep the current strike isolated, despite widespread support for educators and public education.

The Illinois Federation of Teachers, whose total membership is over 90,000 and with whom the CTU is an affiliate, along with the SEIU, whose members amount to tens of thousands in Chicago, have not called on its members to join and expand the strike.

Instead, the CTU is calling on its members to engage in reckless stunt actions. On Friday afternoon, it called on members to meet at Chicago’s Buckingham Fountain downtown and had a few hundred teachers and supporters march on the major roadway Lake Shore Drive to obstruct traffic.

The CTU stunt put teachers directly in danger of police retaliation and violence. One Chicago police commander was caught on camera threatening the teachers by invoking the fascistic violence in Charlottesville, Virginia in 2017. “If you want to march north, I gave a safe route that I can protect. If you go otherwise, you all saw Charlottseville. If someone hurts you, that’s on you.”

Teachers must develop a strategy independent of the CTU to expand the strike and prevent it from being defeated. Teachers should immediately form rank-and-file strike committees to defend public education and mobilize the entire working class behind them.

Appeals must be made to the wider sections of the working class throughout Chicago and across the country—including the tens of thousands of autoworkers currently engaged in a battle against General Motors, Ford and Fiat Chrysler. Autoworkers, like the teachers, confront the shackles of the trade unions that are intent on imposing the terms of the companies.

The fight of Chicago teachers is also bound up with the international class struggle. There is immense opposition in the working class, which is coming into conflict with the entire global capitalist order, with mass demonstrations in Lebanon, Ecuador, Chile and beyond. These struggles must be linked up in a fight against the political establishment and the entire capitalist system.