A fourth round of leaked internal documents from the Organization for the Prohibition of Chemical Weapons (OPCW) was published by WikiLeaks Friday, further exposing the official report on an alleged 2018 chemical weapons attack in Douma—a suburb of Damascus then held by CIA-backed Islamist forces—as having been doctored to justify an attack by the United States, Britain and France against the Syrian government.

The documents point to a systematic effort to suppress evidence uncovered by investigators that cast significant doubt on the official line pushed by Washington and its imperialist allies that the government of Bashar al-Assad had conclusively carried out a chemical weapons attack which killed as many as 49 people. 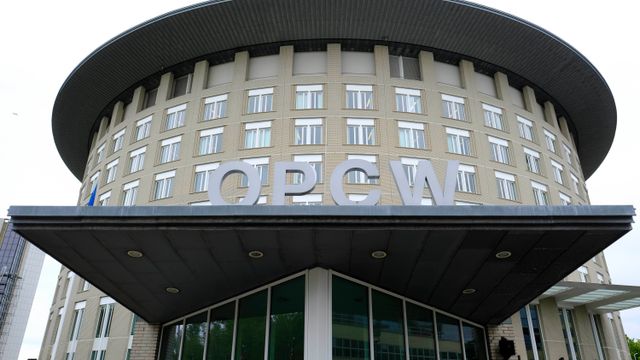 The headquarters of the Organisation for the Prohibition of Chemical Weapons (OPCW), The Hague, Netherlands. (AP Photo - Peter Dejong, File)

Without presenting any evidence to prove that Assad’s military had indeed carried out the alleged attack, purported video of children suffering in its aftermath pushed by the mainstream media was seized on by the US, UK and France to launch an assault on Syrian government targets just one week later. The official OPCW report was published this March, nearly one year after President Donald Trump ordered the series of airstrikes which threatened to spark a wider war with Iran and Russia, Assad’s main allies.

The series of leaks published by the media outlet founded by journalist Julian Assange, currently imprisoned by the British government while awaiting extradition to the US for exposing imperialist war crimes in the Middle East, have exposed the fact that key evidence along with dissent by investigators who were on the ground in Douma was omitted from the final report in order to give the impression that the OPCW had concluded that Assad had carried out a chlorine gas attack on April 7, 2018. The initial round of emails was verified as authentic by Reuters at the end of November.

Just as extraordinary as the leaks themselves is the fact that they have been completely blacked out by the mainstream media in the United States and Europe. Despite the explosive character of the documents that have been published so far, exposing the ostensibly objective and neutral OPCW as a tool of the US and its imperialist allies, there has been no significant coverage in the mainstream media nor any effort by the New York Times, Washington Post or any other major outlet to debunk the documents or their contents.

Last month, Newsweek reporter Tareq Haddad resigned in protest after his editors forcefully rebuffed his efforts to report on the leaks. Given the apparently enforced silence about these now publicly available documents, the question must be asked if the equivalent of a British-style D-notice has been sent by the CIA and the State Department to editorial boards in the US, Europe and elsewhere in an effort to bury any exposure of the lies whipped up in the years-long effort to overthrow Assad.

The latest round of documents includes an email from the head of the OPCW, Sebastien Braha, sent on February 28, 2019, just ahead of the release of the final report on the investigation of the Douma incident, demanding the removal of any trace of the report produced by veteran OPCW inspector and ballistics expert Ian Henderson from the organization’s internal registry. Henderson’s investigation had concluded it was more likely that the cylinders which had been identified as the source of chlorine gas had been placed where they were found, rather than being dropped from the air.

“Please get this document out of DRA [Documents Registry Archive]... And please remove all traces, if any, of its delivery/storage/whatever in DRA,” Braha wrote, referring to Henderson’s report.

The final report omitted any reference to Henderson’s findings, which were not made public until they were leaked to the press, and did not include any other dissenting opinions from investigators who had examined evidence in Douma. An investigator from the Fact Finding Mission (FFM) in Syria noted in an email from a previous tranche released by WikiLeaks that the final report had been so changed that it “no longer reflects the work of the team.”

Another email published by WikiLeaks was sent by Sami Barrek, the team leader of the FFM, to Henderson and several others at the end of July 2018. It noted that all but one of the eight investigators who had been on the ground in Douma would be excluded from further discussion on the final report. Jonathan Steele, former senior foreign correspondent for the Guardian, reported in Counterpunch last month that an OPCW whistleblower known as “Alex” relayed an incident that same month in which three unidentified American officials met with dissenting investigators to declare that there was no question that Assad was responsible for the alleged chlorine gas attack in Douma.

The latest leak also includes the minutes from a meeting on June 6, 2018 between a team of OPCW investigators and three toxicologists/clinical pharmacologists and one bioanalytical/toxicological chemist, who were all experts in medical chemical weapons protection. The purpose of the meeting with the four experts was to ask for their advice on the efficacy of exhuming purported victims of the attack to seek evidence of exposure to chlorine gas and to analyze video and photos of alleged victims to determine if their symptoms aligned with exposure to chlorine or other reactive chlorine gas.

On the first point, the experts agreed that, given the conditions of burial of the alleged victims, the likelihood of finding evidence of chlorine exposure was low, and exhumation would not prove useful. More significantly, on the second point, according to the minutes, “the experts were conclusive in their statements that there was no correlation between symptoms and chlorine exposure,” based on the video and photos they were shown by the investigators.

The chief expert laid out two possibilities for the OPCW team—that there was, in fact, a real chemical weapons attack, or that the event had been a propaganda exercise. The experts were insistent that victims of a chlorine gas attack would not have gathered in piles in the middle of their apartments, as they had been found. Instead, they would have rushed to close-by exits in search of clean air.

The OPCW team concluded after their meeting with the four experts “that the symptoms observed were inconsistent with exposure to chlorine and no other obvious candidate chemical causing the symptoms could be identified.”

Marc-Machael Blum, then head of the OPCW laboratory, noted in an email sent on August 28, 2018 after reviewing the minutes that speculation by the chief expert during the meeting that the Douma incident was staged “was mainly fueled by the fact that the circumstances of death for the victims do not match chlorine rather than corpses arranged for propaganda purposes.”

These observations from the investigators and experts, countering the official narrative, were likewise excluded from the final OPCW report.

The war in Syria