A group of residents from the central Australian city of Alice Springs has established a support group to fight for the defence of WikiLeaks founder Julian Assange and oppose his extradition to the US on bogus espionage charges.

The decision, which was made after the Socialist Equality Party’s successful November 24 public meeting in Alice Springs, is a powerful indication of the widespread popular support across Australia for Assange and US whistleblower Chelsea Manning. The group includes health and welfare workers and retirees and is led by Margaret Grace Richardson, who sponsored the SEP’s public meeting. 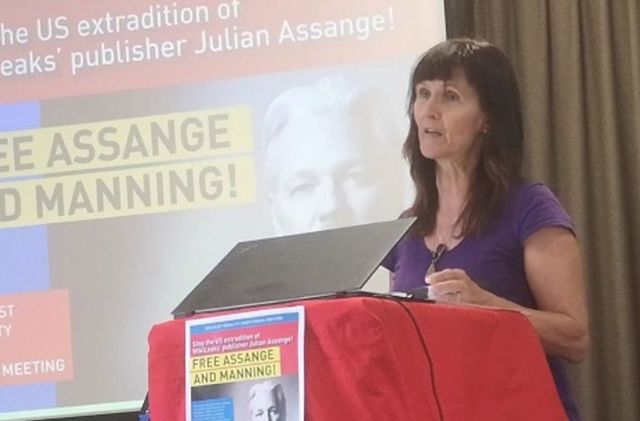 “After seeing Julian Assange being dragged from the embassy in May 2019, I started being active in the fight to defend him. I researched his history and felt compelled to do everything I could to free him,” Richardson told the World Socialist Web Site.

“I became aware of the SEP rally in Sydney in June this year. I attended and returned to Alice Springs more determined and inspired to fight for Assange’s freedom. I realised that the SEP was the only political party running a public campaign to free Assange and Manning. I linked in with Facebook groups also defending Assange and broadened my networks.”

In early November, Richardson wrote an open letter to Greens parliamentarians, voicing her concern about Assange’s deteriorating health and condemning the party leadership’s refusal to mobilise its membership to defend the internationally-acclaimed journalist and publisher and demand his immediate release from Belmarsh prison.

Following the SEP public meeting Richardson contacted those who attended and called a meeting a week later on November 30 to establish the support group. Meetings have been held every week since then to discuss the latest political developments in the Assange campaign and plan out future actions to educate and mobilise other Alice Springs residents.

Fiona, 67, a health worker, recently joined the Alice Springs group. “I was desperate to join any group that will fight in defence of Assange,” she said.

“John Pilger wrote about the normalisation of the unspeakable and that is what is happening in relationship to Julian Assange and his imprisonment. You have no choice; you must join a group and fight because you cannot accept the unspeakable.

“Politics in Australia is disgusting and rotten to the core so I am not surprised [that Australian parliamentarians are not defending Assange] because he is lifting the veil on all their corruption, so he is dangerous. The Greens are the same, they make a few little statements but they do not stand up strongly on this or anything else of importance. They are generally well-to-do middle-class people with a bit of a conscience but no will to fight.

“Australia is the lackey of the US and Canberra and follows Washington on everything. People will fight against this but not the ones who have the power to change things.” 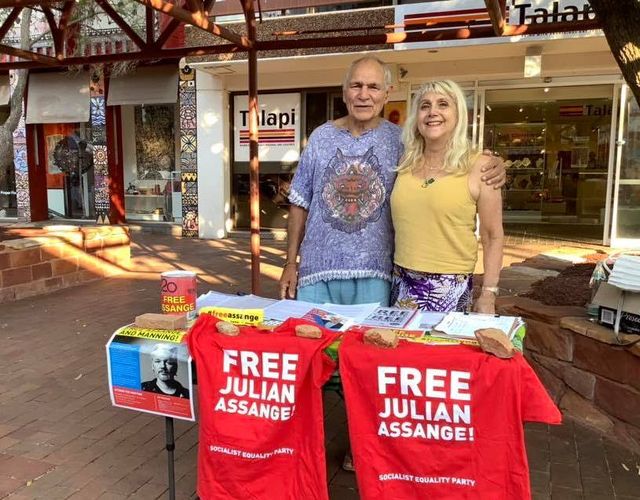 The group has established a Julian Assange Supporters Alice Springs Facebook page that posts regular updates on the group’s activities and material from the international campaign to end the persecution of the Australian citizen. It is planning to step up its activities in the lead-up to the forthcoming extradition trial in London in February 2020.

Group members also hold regular stalls in the Todd Mall, the city’s main shopping precinct, to distribute World Socialist Web Site articles on Assange and sell literature and t-shirts. Posters defending Assange have been placed in key locations including cafes, public buildings and shopping centres in the city and the Charles Darwin University campus. In the past fortnight it has initiated a petition to demand that the Alice Springs City Council pass a resolution calling for Assange’s freedom.

“We are monitoring the widespread and growing support both here and internationally and are overwhelmed by the passion with which people are supporting the campaign,” Richardson said.

Establishment of the support group in Alice Springs points to the sort of formations workers and youth around the world need to form in order to take forward an international campaign needed to secure the release of Assange and Manning.