The participation of “yellow vests” in Saturday’s event testified to the global scope of support for Assange, with solidarity events held in Australia, New Zealand, Mexico, Austria, Switzerland and Germany ahead of US extradition hearings which open in London on February 24. 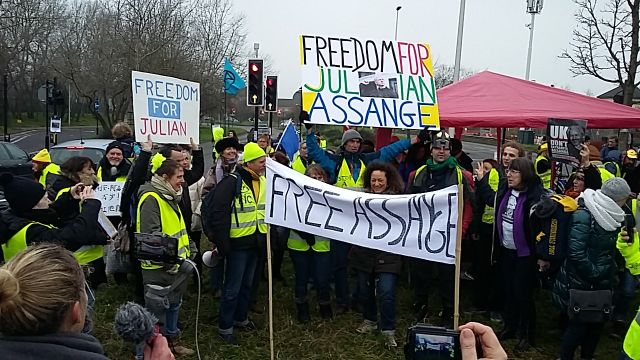 Assange has been held inside the maximum-security prison since April 2019. If extradited, he faces Espionage Act charges and the prospect of life imprisonment, or even the death penalty, for exposing US war crimes and global diplomatic intrigue.

Two coaches filled with “yellow vests” arrived outside Belmarsh at 9 a.m. They included workers and young people from Paris, Lille, Marseilles, Nice and other cities and towns across France, swelling the size of the protest to over 200.

The “yellow vest” contingent travelled from France amid mass strikes and demonstrations against the austerity agenda of French President Emmanuel Macron. The French ruling elite has responded to the protracted Yellow Vest protests and strikes with police violence and repression.

Corinne, one of the “yellow vests” who helped organize Saturday’s protest, told the WSWS: “We wanted Julian Assange to hear that we were there. We started an impromptu demonstration and the prisoners were able to partially open their windows so that the sound could come through. We tried to push our way into the car park and we were pushed back.

“But a security guard came over to tell us that Julian had heard us, which was really great. Another guard said that Julian is very interested in the television and the newspapers and is the prisoner who receives the most post. He didn’t have access to information before.” (Read the full interview with Corinne here.) 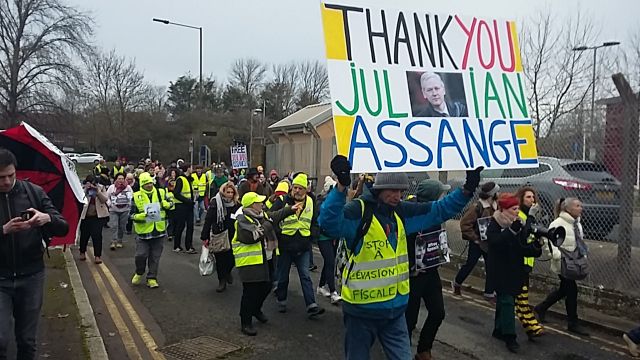 French film director Laurent Bouhnik was also part of the “yellow vest” contingent, telling French journalist Fabien Rives: “There are three directors here today, and as for me, I’m shocked. I am really shocked by what is taking place here. And it’s not ignorance. It is simply a form of class contempt. It is making a mockery of someone who had voluntarily revealed a truth that the powerful didn’t want us to hear.

“As an artist, I am incredibly concerned. I wouldn’t be able to make films anymore if I wasn’t out here with my friends… politically it would just be impossible. What is happening to Julian is inconceivable. And nobody is doing anything, or at least, too few… All across the world we are starting to struggle, and it is not for nothing, and Julian Assange is the symbol of all of that.”

The rally spanned the entire day, beginning at 8 a.m. and ending late at night. Demonstrators chanted slogans in French and English, demanding Assange’s freedom and denouncing the war criminals who have spearheaded his persecution. Throughout the day they won support from passing motorists, who honked their horns, waved and stopped to take leaflets.

Unlike previous protests, police confronted demonstrators and blocked them from gaining access to the prison’s foreground. But demonstrators made their presence felt, marching around the perimeter of Belmarsh prison.

Maxine Walker, from the Julian Assange Defence Committee (JADC), told the WSWS, “The ‘yellow vests’ displayed a great deal of international solidarity with Julian. I think they would have heard it inside the prison because it was very noisy. So, there’s a fair chance that lots of prisoners heard it, including Julian. He would have been cheered.”

“The media in Britain largely have ignored the protests that have been going on in France,” Walker said. “Very few people have been able to see those protests in a proper form. The presence of the ‘yellow vests’ always inspires, because people who support Julian Assange are well aware of the repression that has been meted out to protesters in France and that despite the government and police attacks, they have continued with great determination. They provide an example for people in other countries.”

She added that Assange is “seen in many, many countries, as a symbol of the struggle for free speech, for truthful journalism. It is recognised that he carried out an immense act of bravery in developing a new form of journalism. In oppressed countries, particularly where imperialist wars have been waged, there is a great appreciation of his role. I was not surprised that there was a demonstration in Kabul [Afghanistan] when he was arrested [last year].” 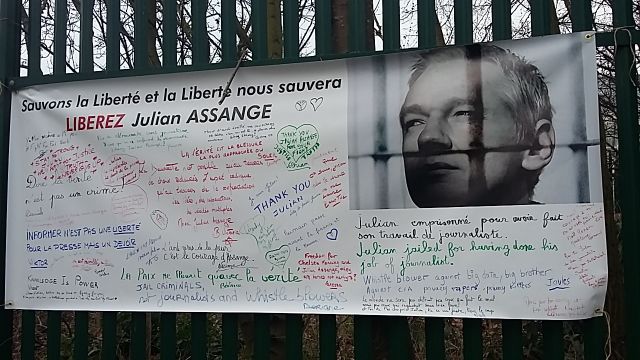 Walker contrasted the support for Assange among ordinary people with the role of the British political establishment. “Almost all politicians have been too cowardly to speak out or agree with the persecution of him,” she noted.

Belmarsh Prison is notorious for its brutal and repressive conditions. Throughout most of his time there, Assange has been held in conditions of virtual solitary confinement, denied access to legal documents and other material crucial to preparing his defence—conditions that have been condemned by his legal team, by campaign groups and by the UN Rapporteur on Torture Nils Melzer.

Farrell said that the decision was a “dramatic climb-down” by prison officials, which they only took after a campaign by Assange’s lawyers as well as supporters outside and inside the prison.

The WikiLeaks representative revealed, “A group of prisoners have petitioned the prison governor on three occasions insisting that the treatment of Assange was unjust and unfair.” This, he said, had contributed to the transfer, which he described as a victory for Assange’s legal team, campaigners and the prison population.

Farrell warned, however, that “there remain serious concerns about Julian Assange’s treatment in Belmarsh. He is still being denied adequate access to his lawyers as even the judge recognised at a case management hearing in Westminster Magistrates Court. And campaigners continue to insist that Assange should not be in jail at all, least of all in Belmarsh high security prison.”