In a question to Prime Minister Boris Johnson in the House of Commons yesterday, Jeremy Corbyn condemned the attempt to extradite WikiLeaks publisher Julian Assange to the United States.

Assange faces Espionage Act charges and life imprisonment for what the UK Labour leader stated was his role in the exposure of “war crimes.”

For the past year, Corbyn has led the suppression of any discussion over Assange’s imprisonment in Britain and the country’s participation in the US-led attempt to destroy him.

Before yesterday’s parliamentary session, he had not mentioned Assange’s name for 10 months. In last December’s General Election, he ensured that the fate of Assange, a political prisoner of the British state, was never raised. 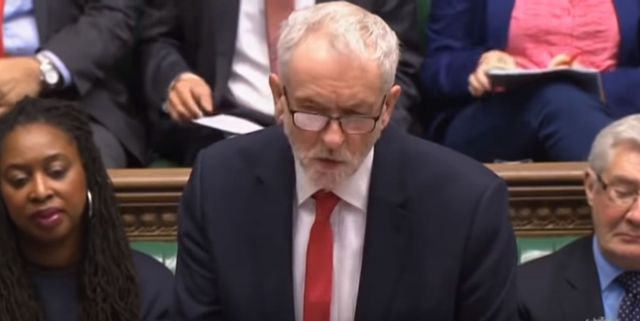 During Prime Minister’s Questions, he cited a recent report by the Parliamentary Assembly of the Council of Europe branding the attempt to extradite Assange as a “threat to all journalists.” The Labour leader said that Assange had been charged by the US “for exposure of war crimes, the murder of civilians and large-scale corruption.”

He asked: “Will the prime minister agree with the parliamentary report that’s going to the Council of Europe that this extradition should be opposed and the rights of journalists and whistleblowers upheld for the good of all of us?”

Johnson, whose chief ally is President Donald Trump and who gloated over Assange’s arrest last year, declared that he would “not mention any individual cases,” before absurdly claiming that his government would “continue to uphold” “the rights of journalists and whistleblowers.”

Corbyn has done everything possible to isolate Assange and prevent the emergence of a mass political movement demanding his freedom. Now, with less than two weeks before the start of Assange’s extradition hearing, and just seven weeks before he is replaced as Labour leader, he has acted to conceal the political stench left by his own silence.

Corbyn’s last statement in defence of Assange was made on April 11, 2019 when the WikiLeaks publisher and journalist was illegally seized from Ecuador’s London embassy by a police snatch squad. Corbyn tweeted: “The extradition of Julian Assange to the US for exposing evidence of atrocities in Iraq and Afghanistan should be opposed by the British government.” Within 48 hours, following a letter of protest from the Blairites and demanding that Assange be extradited to Sweden over manufactured “rape” allegations, Corbyn fell into line—not only telling reporters that Assange was “not above the law” but also declaring that his fate was “a matter for the courts.”

Assange had never been charged with a crime in Sweden and prosecutors had repeatedly dropped “preliminary investigations” against the WikiLeaks founder. Swedish prosecutors have since dropped the entire threadbare frame-up.

Even after United Nations Special Rapporteur on Torture, Nils Melzer, found in May that the WikiLeaks publisher was being subjected to ongoing psychological torture, Corbyn said nothing. The unprecedented intervention of more than 100 medical doctors, who warned that Assange might die in prison if he did not receive urgent medical care, elicited no response from either Corbyn or his Home Secretary Diane Abbott.

Even when he was directly confronted, Corbyn refused to speak out: 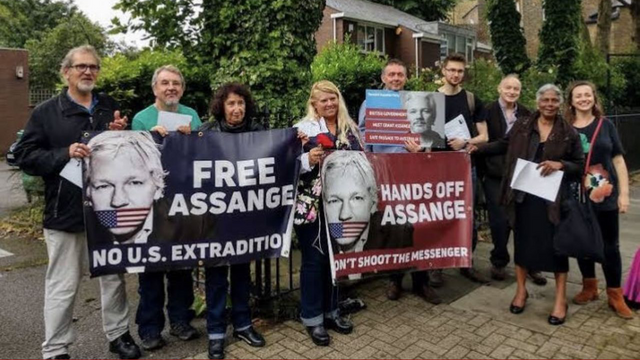 Corbyn’s silence provoked an increasingly angry response among those campaigning for Assange’s release. To try and rescue the tattered reputation of the pro-Corbyn “left”, last week a meeting was called by the Don’t Extradite Assange (DEA) campaign group with McDonnell as the keynote speaker—courtesy of John Rees of the pseudo-left Counterfire organisation. Corbyn’s speech yesterday was his own attempt at self-rehabilitation.

His aim is to make a “personal” show of opposition that commits his party and the trade unions to do absolutely nothing.

Of course, Corbyn’s weasel words will be proclaimed from the rooftops by the leadership of the DEA—proof that their “slowly-slowly” policy has finally paid off with a benediction from the “great man” himself.

Such pathetic efforts to proclaim the bona fides of the ever dwindling, politically irrelevant and rightward careening Labour “left” are not only contemptible. If accepted, they would disarm all those fighting to free Assange as part of a broader defence of democratic rights and opposition to war.

The World Socialist Web Site and the Socialist Equality Parties around the world are seeking to build an international movement of the working class to secure Assange’s freedom. The SEP in Britain was the only party that rejected the calls of Corbyn’s supporters to remain quiet on Assange, lest it embarrass the Labour leader.

This principled position has been vindicated. Corbyn has only spoken out in the dying days of his party leadership after having handed the reins of government to Johnson. As ever, his “support” for Assange is purely a matter of personal conscience.

Even now, Corbyn has advanced no concrete action for the mobilisation of public support behind Assange, while McDonnell has merely stated that he will ask permission from Home Secretary Priti Patel to visit him in Belmarsh maximum security prison.

Meanwhile, the party’s leadership contest is predicted to result in the victory of Blairite Sir Keir Starmer. As director of public prosecutions, he opposed a bail request by Assange’s legal team. A spokesman for the Crown Prosecution Service admitted that this was done “without consulting the Swedish authorities.” In August 2012, when the Stockholm authorities considered closing proceedings against Assange, the CPS threatened, “Don’t you dare get cold feet!!!”

Corbyn’s tenure as Labour leader has been an object lesson in the impossibility of fighting for democratic rights and against war by supporting or peddling illusions in the Labour Party and its “left” representatives. It has demonstrated that the fight to block Assange’s extradition, secure his freedom and defend civil liberties requires the development of an independent movement of the working class—the vast majority of the population—directed against the entire official political set-up. This is the perspective that will be advanced at an SEP public meeting in London on February 23, and at demonstrations in Sydney, Melbourne and Brisbane in Australia and Wellington, New Zealand.