Australian parliamentarians Andrew Wilkie and George Christensen visited WikiLeaks publisher Julian Assange yesterday afternoon in London’s Belmarsh Prison. The aim of their visit was to examine the conditions of his detention and express opposition to his threatened extradition to the US.

At a press conference outside the maximum-security facility afterwards, both stated their agreement with the finding of United Nations Special Rapporteur on Torture Nils Melzer that Assange has been the victim of psychological torture. Coming from two elected officials, this is a damning indictment of the arrogant dismissals of Melzer’s assessment by the governments responsible for Assange’s decade-long persecution, including Britain and Australia.

Wilkie, an independent MP, and Christensen, a representative of the Liberal National Party (LNP), which is in a governing coalition, travelled to Britain to see Assange at their own expense. They did so in the lead-up to British extradition hearings beginning February 24 that will determine whether Assange is dispatched to the US, where he faces Espionage Act charges and life imprisonment for exposing American war crimes. 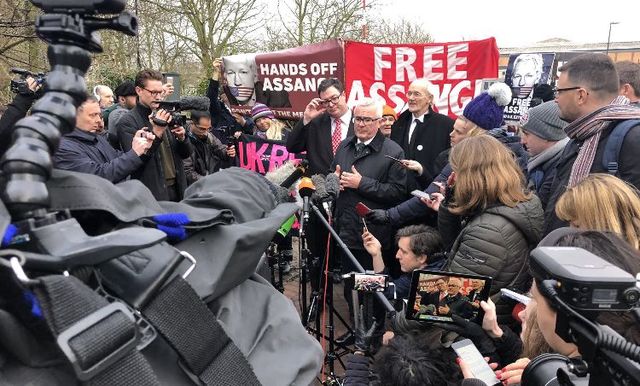 The visit was preceded by meetings with Melzer and Assange’s lawyers. It was the first major action of the Australian cross-party parliamentary grouping formed last October and chaired by Wilkie and Christensen, which is a calling for the extradition to be blocked and Assange to be returned to his native Australia.

After emerging from the prison, dubbed “Britain’s Guantanamo Bay,” Wilkie described Assange as “clearly a man under a lot of pressure.” While noting that he was not a doctor, Wilkie said that his hour-long discussion with Assange had left him with “no reason to doubt the assessment of the UN Special Rapporteur on Torture Nils Melzer when he said that Julian exhibits the signs of someone who has undergone psychological torture.”

Wilkie addressed claims that Assange’s conditions had been eased after he was moved out of solitary confinement in the prison’s medical ward last month. The MP revealed that Assange remains alone in a cell for more than 20 hours per day. “For all intents and purposes, a reasonable person would say that is still solitary confinement,” Wilkie said.

The MPs pointed to the continued undermining of Assange’s rights by the authorities at Belmarsh, even in the days before his extradition hearings. They had booked a visit with Assange long in advance for last Sunday, but this was cancelled without reason, forcing them to reschedule to yesterday. Since his arrest by British police last April, Assange’s lawyers have complained about having extremely limited access to their client, while his “social visits” have been restricted to a bare minimum.

Wilkie declared, “I walk out of Belmarsh in absolutely no doubt that he has become a political prisoner of this country and that the US is determined to extradite him to the US, to get him… This is madness that the UK is even entertaining having a court case. The UK should be saying to the US president, ‘Back off.’”

Wilkie demanded that Australian Prime Minister Scott Morrison intervene in defence of Assange, who had committed no crime. The WikiLeaks founder was being persecuted solely for having “acted as a journalist and exposed hard evidence of American war crimes.”

The MP concluded by stating: “There was no espionage. There was no hacking. It was just a person doing the right thing and publishing important information in the public interest and frankly it is an international scandal that he is locked up in there in those conditions as a political prisoner.”

In a pointed criticism of the support for Assange’s persecution by the Labor Party opposition and its leader Anthony Albanese in Australia, Wilkie said, “The fact that I don’t know Mr Albanese’s position is telling.”

Christensen added that it was evident that Assange’s protracted detention had “taken its toll... It was clear that his mental state was not good and that his health was not good. When I asked him how he was doing, he said straight away ‘Not good.’”

Christensen said that Assange had spoken about his family, including his mother Christine, who was affected by Australia’s recent bushfire crisis, and his children. In a thinly veiled rebuke to the gathered media representatives, he stated that Assange was “not the caricature he has been made out to be,” but a “real person” whose rights had to be respected.

The LNP MP said that the government, of which he is a member, had to take action to ensure that Assange was not extradited. His statements follow repeated declarations by Morrison, who has close ties to US President Donald Trump, that Assange must “face the music” and that he will not be given “special treatment.”

Both visiting MPs stressed the broad popular sympathy that exists for Assange.

Wilkie stated, “Please understand that Julian has a great many supporters around the world and a lot of them are in Australia. The number is growing day by day. As people learn more about the facts of the case, when they are able to see beyond the innuendo, allegations, the misinformation and disinformation, they are almost universally coming to the conclusion that a great injustice is being done. I expect that there will be protests around the world. Politicians need to pay attention to that.”

John Shipton, Assange’s father, who was also present, thanked the MPs for their visit.

The formation of the Australian parliamentary group was a response to the mounting popular support for Assange. It marked a breach in a years-long conspiracy of silence on Assange’s plight, enforced by the country’s entire media and political establishment, including members of the grouping itself.

Every Australian government, beginning with the Greens-backed Labor administration of Julia Gillard, has refused to defend Assange, who is an Australian citizen. Instead they have thrown him to the wolves and supported the US-led vendetta against him. This is in line with Australia’s support for the American military alliance and their own crackdown on democratic rights in response to mounting social opposition.

Gillard summed this up by falsely declaring that Assange and WikiLeaks were guilty of an “illegal act” by publishing evidence of war crimes, at the same time as her government was aligning Australia with a massive US military build-up directed against China.

The record is a stark demonstration of the fact that an Australian government will fulfil its obligations to defend Assange only if it is compelled to do so by mass pressure from workers and young people. The Socialist Equality Party is holding rallies in Sydney and Melbourne this weekend to contribute to the building of such a movement, while the SEP in Britain has called a public meeting in London on Sunday that will demand an end to the extradition proceedings and Assange’s freedom.