In his press conference on Thursday, US President Trump stepped up his propaganda war and threats against China blaming it for the deadly COVID-19 pandemic that has cost the lives of more than 230,000 people internationally.

Trump repeated the unsubstantiated allegation, circulated initially in far-right circles, that the coronavirus was not the result of animal to human transfer, but rather was produced in a Wuhan virology laboratory and either escaped, or was deliberately released.

The US president claimed to have seen evidence to prove the virus spread from the Wuhan laboratory, but he repeatedly dismissed requests to provide details, saying: “I’m not allowed to tell you that.” 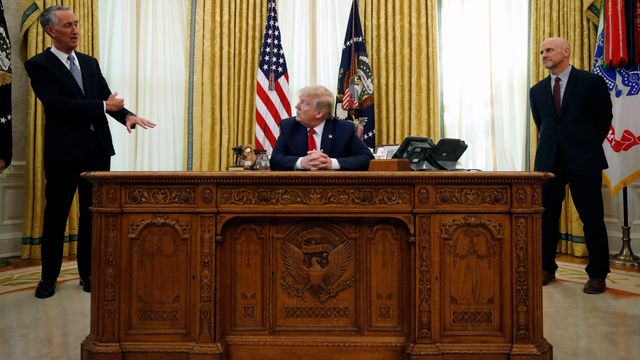 Daniel O’Day, CEO of Gillead Sciences Inc., left, and Stephen Hahn, commissioner of the U.S. Food and Drug Administration, right, during a meeting with President Donald Trump in the Oval Office of the White House, May 1, 2020, in Washington

In the face of the overwhelming opinion of virologists that COVID-19 did not emerge from a laboratory, the Trump administration has been pressing US intelligence agencies to concoct evidence to support the conspiracy theory.

Tellingly, just prior to Trump’s press conference, acting Director of National Intelligence (DNI) Richard Grenell issued a statement saying that the Intelligence Community “concurs with the wide scientific consensus that the COVID-19 virus was not man-made or genetically modified.” When asked about the statement, Trump appeared to be ignorant of it.

Yesterday, when asked about Trump’s allegation, World Health Organisation (WHO) emergencies chief Michael Ryan stressed that his UN agency had “listened again and again to numerous scientists who have looked at the sequences” of the virus. “We are assured that this virus is natural in origin,” he said.

Trump also blasted China for not having done more to prevent the spread of the virus, even suggesting that they “chose” to allow the pandemic. He absurdly declared COVID-19 could have been “contained relatively easily” and China could have contained it. “They were either unable to, or they chose not to and the world has suffered greatly,” he stated.

Whatever the initial delays of its leadership, there is a clear record that China responded quickly and effectively to a virus whose deadly character and infectiousness were for them initially unknown, and promptly informed the world through the WHO. By contrast, the Trump administration dismissed what for it were known dangers and took no action for weeks resulting in a rapidly escalating death toll in the US which is now over 63,000.

This campaign of gross distortions and outright lies is not only a crude attempt to deflect attention from the Trump administration’s criminal negligence as it faces mounting opposition in the working class for its push for a return to work under unsafe conditions.

It is also part and parcel of the escalating economic warfare and military build-up against China, regarded in Washington as the chief threat to US global dominance, that began under President Obama and has escalated under Trump.

The establishment media in the US have swung in behind Trump amplifying his falsifications and anti-China propaganda. The Washington Post published an opinion piece last month giving credence to the conspiracy theory of the extreme right about the Wuhan laboratory. On Thursday, its editorial attempted to transform China’s counter offensive against Trump’s lies into “Chinese bullying to avoid accountability.”

The Democrats, far from being at all critical of the anti-China campaign, have been attacking Trump from the right for being too accommodating to Beijing. Joseph Biden, the Democratic presidential front-runner, has run a series of attack ads, condemning Trump for not pressing China to allow in US health officials and not blocking travelers from China soon enough.

In one ad, Biden declares that Trump “left America exposed and vulnerable to the pandemic. He ignored the warnings of health experts and intelligence agencies and put his trust in China’s leaders instead.”

Trump, however, is preparing to ramp up the attacks on China, from words to punitive actions. The Washington Post reported that a group of Trump officials are beginning to examine proposals for sanctions against China and demands that it pay financial compensation for its handling of the pandemic.

At his press conference on Thursday, Trump declared that the trade deal with China signed earlier this year to prevent a descent into full-blown trade war “now becomes secondary to what took place with the virus. The virus situation is just not acceptable.”

According to the Washington Post, among the retaliatory proposals under discussion in the White House is the cancellation of some of the massive US debt with China. Such a step would not only hit China, but a repudiation of debt by the world’s largest economy would severely undermine confidence in the already highly-vulnerable, international financial system.

Trump’s top economic adviser Larry Kudlow was quick to scotch the suggestion lest it further panic the markets. “The full faith and credit of U.S. debt obligations is sacrosanct. Period. Full stop,” he told Reuters.

Kudlow did not rule out other forms of retaliation, however. Referring to China, he told CNBC: “They have a lot to answer for, they’re going to be held accountable. How, what, when and why” is up to the president.

The increasingly vitriolic US attacks on China demonstrate that far from easing geo-political tensions and encouraging international cooperation, the COVID-19 pandemic has further exposed and fueled the toxic international relations that are leading to economic war and military conflict between major powers.

The US has for a quarter century sought to stem its historic decline through aggressive, neo-colonial wars in the key strategic areas in the Middle East and Central Asia. The Obama administration targeted China diplomatically, economically and militarily in what was known as “the pivot to Asia”—measures that have only escalated under Trump.

The COVID-19 pandemic has only further exposed the vulnerability and decay of American imperialism, heightening fears in Washington that China could emerge from the crisis in a stronger position. Even as the US health system is starved of the necessary funds to fight the virus, Congress is foreshadowing providing tens of billions of extra funding specifically to prepare for war on China.

At the same time, the US Navy has ramped up its provocations against China in the South China Sea, sending warships into areas claimed by Malaysia, Vietnam and China on the spurious pretext of defending “freedom of navigation.” Such reckless steps in this highly tense situation threaten either by accident or design to trigger a military confrontation that would rapidly spin out of control.