The arrival of a contingent of the Missouri National Guard has heightened the police-state atmosphere in this suburb of St. Louis. 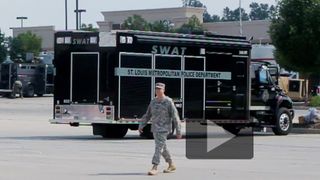 As the Missouri governor deployed National Guard forces to Ferguson, residents denounced the military-police crackdown and attacks on their right to assemble peacefully. 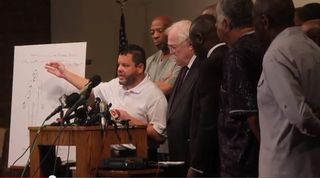 A Ferguson cop fired at least six bullets into the victim, including two to his head.

Workers and young people throughout the United States expressed their outrage at the police killing of the unarmed 18-year old and the militarized response of police to protests in Ferguson, Missouri.

The state of emergency in Ferguson, Missouri

EU advisors advocate use of military against strikes and protests

An EU think tank has advised governments to protect the rich from the poor by suppressing social protests.

Ukrainian army steps up offensive in the east

On Sunday German foreign minister Frank-Walter Steinmeier warned that “we continue to slide into a direct confrontation between Russian and Ukrainian combat forces.”

Still no evidence of Russia’s alleged military incursion into Ukraine

If reports from the Guardian and the Telegraph are to be believed, experienced journalists stood by and watched Russian military vehicles enter Ukraine without taking a photograph to record the event.

Why have the media and Obama administration gone silent on MH17?

The president’s statement Monday underscored that the US intervention in Iraq is steadily escalating in terms of both its means and objectives.

Australia’s pseudo-left covers up for US imperialism in Iraq

More on the crisis in Iraq »

Fourteen percent of Americans rely on food pantries to feed themselves and their families.

The spill is the third this year along the Gulf Coast.

Mike Carlton’s resignation was the result of a concerted campaign by Murdoch’s News Limited and the right-wing Zionist lobby.

The seizure of Germany’s Pacific colonies underlined the real character of World War I as an imperialist war.

The international significance of Australia’s World War I “celebrations”

The rise in self-employment is driven not by an “entrepreneurial spirit,” but the lack of full-time employment offering an adequate income and pension.

Workers’ resolve is hardening, even as the unions manoeuvre for paltry wage increases.

Capitalism and the police-military mobilization in Ferguson, Missouri

Defend the rights of immigrant workers! Unite the working class of North, Central and South America!
Resolution of the SEP (US) Third National Congress

This resolution of the Third National Congress of the Socialist Equality Party (US) was adopted unanimously on August 6, 2014.

Oppose the Israeli assault on Gaza!
Resolution of the SEP (US) Third National Congress

This resolution was adopted unanimously by the Third National Congress of the Socialist Equality Party of the United States. 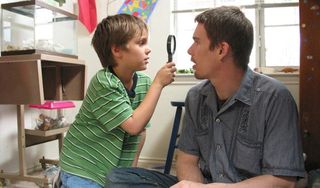 Richard Linklater’s Boyhood: American lives over the course of a dozen years

Using the same cast, the writer-director filmed sequences once a year for twelve years, centering on a boy, his family and their surroundings in east and central Texas.

Lucy: A little knowledge is apparently a dangerous thing

Bacall, one of the few surviving performers prominently identified with Hollywood films in the 1940s, died at her home in New York City on Tuesday at the age of 89.

Get On Up: The James Brown story

Fight cuts to education and the drive to war!

the International Youth and Students for Social Equality (Australia), 19 August 2014

The fight for education rights must be inseparably linked with the broader struggle against austerity, the attacks on democratic rights and the dangers of war.

US farm fatalities: An unpublicized epidemic

Condolences on the death of Guy Charron

In the two weeks since Comrade Guy Charron’s tragic death, the SEP (Canada) has received many condolence letters from comrades around the world.

It is with immense sadness that we announce the death of Guy Charron, a leader of the Socialist Equality Party (Canada) and a daily collaborator in the work of the WSWS. On August 22, 1989, former Black Panther leader Huey Newton was shot three times in the head and killed in Oakland, California. Days after the German Social Democratic Party and the other major parties of the Second International betrayed the cause of socialism by supporting their “own” governments’ war efforts, Vladimir Lenin authored a statement advancing a revolutionary internationalist reponse to the barbarism of World War I.